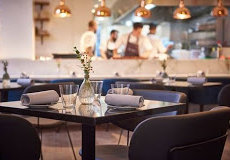 So you spend the first sixty something years of your life without crispy skin in your butter, then two bowls come along in two weeks. You may recall last week’s duck skin butter at Mark Greenaway in Edinburgh. Well, in a refined part of Covent Garden, in the funky Frog by Adam Handling, guess what we found? Whipped butter smothered in little crispy bits of chicken skin, with a smear of chicken gravy hiding at the bottom of the dish. A signature dish of the good Mr H, I wondered? Incredibly moreish, or so I thought. I started to hunt for a recipe. Failed to see it mentioned in the annals of Weightwatchers or Slimming World, but I did find a reference from 2010 in a Danish magazine.

Adam Handling is one of the latest of the proud ranks of Scottish chefs who have taken the professional version of Masterchef by storm. He was a finalist in 2013. He is a throwback in many ways, having started a newly re-established, old fashioned chef’s apprenticeship at Gleneagles, aged 16. Then the traditional road ended, and the turbochargers kicked in. Head chef at The Fairmont, St Andrews at 20, he moved to hotel kitchens down south, founded The Frog E1 in Shoreditch (now in Hoxton), then this place. There is also a zero-waste coffee and beer establishment, The Bean & Wheat, and the newly reopened Belmond Cadogan Hotel in Chelsea. He has just turned 30. Simply reading about  all of this makes you want to sit down to a nice quiet lunch.

Quiet is what you won’t get in the Southampton Street outpost. The design is the 90s standard of hard walls, floors and tables. The racket even early on a Thursday lunchtime was significant. This barely seemed to matter as we were immediately charmed by a trio of sommelier, general manager and Italian waitress. (The latter thought my Italian accent was of the south: my Milanese teacher is appalled.) Wine and sourdough were brought, along with the aforesaid chicken butter, and the world was a happy place.

An interesting menu. I’ve rather gone off tasting menus, so we went for the carte. Inventive stuff. A starter of celeriac, dates, apple and fresh truffle features salt baked celeriac stuffed with something – a cream free alternative provided for L with no fuss at all - topped with slivers of fresh celeriac and apple and a mound of truffle. The mushroom agnolotti, with black garlic and little crispy balls of fried bone marrow, was as fine a starter as I’ve had. The trouble was that our trio of best friends had deserted us. If you want to keep my wine bottle at a distance from me, fine, but don’t leave me thirsty. Not only were the glasses not topped up, our attempts to attract attention soon resembled a desert island castaway who has spied a passing tanker. I wanted to discover if the foam on my starter contained cream, to know if I could safely share it. Sadly my lovely Italian amica had discovered the charms of others and attempts at communication with her were also in vain. The first main was a good seasonal plate of lamb, asparagus and new potatoes. It cost £33, it wasn’t large and a side of BBQ hispi cabbage would have been an extra £8.50. (Even bowl of mashed tattie would set you back £7.50.) Even more meagre was the artichoke with crispy egg. This was a (very well executed) crispy egg on top of some artichoke purée, with a couple of bits of either artichoke or potato on the side (I didn’t get a taste, so I can’t be sure.) This was a three bite course from a tasting menu, not a twenty seven pound main dish. As we were still hungry, we decided to share a cheese platter. The trouble with an open plan kitchen is that there are no secrets. Watching our cheese platter spending five minutes being warmed up under the lights at the pass might well have rendered a Chevalier de Fromage apoplectic. The selection wouldn’t have excited him either. A couple of cheddars and a blue were OK. There was a very fine goat, then something else average.

An odd one to assess. Some of the skill levels on show are breathtaking and my starter was beyond wonderful. Because things started so well, we were feeling good, but later analysis is bringing this lunch down to earth. Five courses plus snacks on the smaller tasting menu would have cost £65. My two and a half courses cost £60. Had everything been of the quality of the starters, and if the staff had stayed as attentive throughout as at the outset, all would have been very well. But, but, but…