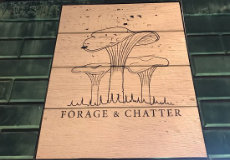 I’m not sure why it took me so long to get round to eating here. Perhaps it was the name. Foraging has its place, but it’s become terribly self conscious of late. I’m sure vegans forage. In an otherwise admirable restaurant in the Canongate, the only dodgy dish was the foraged salad, a bit like sweeping up the verge where you walked your dog. (Although I’m sure they washed it first.) Given the cool reception Giles Coren gave to Rene Redzepi’s Noma, I don’t think he’s a fan either.

Add to that the fact that no restaurant on this site has ever made much of a mark, and you have my reasons. Not sound, I agree, but so what. Then two things happened, Firstly, not one, not two but three lunches were cancelled, all in new places which I planned to review. Never mind no room at the inn, there threatened to be no review for the adoring public. Secondly, at the end of a slightly surreal evening, we met the genial Cameron McNeil, proprietor of Forage & Chatter. No one, he declared, has ever succeeded on this site – but we will. OK, put it to the top of the list. For many the bedrock of their CV will be Eton and Oxbridge. In Cameron's case it's Gordonstoun and Gordon Ramsay.

For my own part, I have nothing against basements – Le Gavroche haven’t done too badly in theirs – but this takes you by surprise. A narrow wee entrance hall with a tiny bar opens up into a suite of rooms. The design reassures you that you can have decor which is both Scottish and stylish. Staff are young but professional, and there are lots of them. This is no shoestring operation. And best of all, this is a kitchen which really knows its business. In the modern idiom, the menu comprises lists of ingredients. The problem with that modern idiom is that in so many places these ingredients can be a bit random, ideally showcasing stuff of which the average diner has never heard. No such problem here. Flavour matching is what this place excels at.

You start with the talking point of a fried roll, which comes with a wondrous green pesto and a butter topped with pear and thyme powder. Pear and thyme? I really have no idea why, but it all disappeared pronto. Crispy oxtail was oxtail formed into a patty and fried. Could have been a little dry, but not when it came with onion two ways (lightly pickled and seared) and mushroom (pickled, puréed and foamed). That’s an awful lot of work for a starter. A great winter dish, whereas the cured trout with beetroot and lime gave the promise of spring, even if the horseradish seemed to have taken the night off. Lamb rump looked alarmingly red in the middle, but was in fact perfect. The attention to detail was extraordinary. Chef’s preferred way with veg is to cook them then sear them. Tiny navet turnips spoke for themselves, but baby sprouts slipped down with an after taste of wasabi or mustard. Sea bass came with broccoli on an interesting bed of walnut and other things. The only question mark was over the sauce vierge – finely chopped seasoned onions bear no resemblance to any sauce vierge I’ve ever encountered. L didn’t care for them.

Finally, to dessert. A chocolate moelleux wasn’t of the melting variety, but was beautifully paired with pear in various forms, poached, gel and sorbet. Pear sorbet can be quite a dull thing – I don’t think this kitchen could produce dull food if it tried.

This place is a triumph. The only table we could secure on a Friday night was at 6.30, and they were just getting warmed up as we left. Fantastic food and great service in the heart of the West End. Who could ask for more?