I am taking my first faltering steps to learn the Czech language. People tell me it’s difficult, but my guess is that learning English pronunciations must be a nightmare.  Take for example the words, therefore, plant, pack, female pig: so, sew, stow, but sow. Or, things in a line, type of deer, propel a boat, argue: row, roe, row, but row. Now the Italian language, with which I’m reasonably familiar, has its moments too, but I’m attracted to the resonance of similar words with completely different meanings. Take, for example, Pinocchio, ginocchio, finocchio: wooden puppet, knee, fennel, today’s vegetable.

Not all that commonly used in the UK, fennel is a member of the carrot family. More fascinating, but useless facts? Of course. The Greek word for fennel is μάραθος (marathos). The name of site of the battle, which in turn became the name of the race, simply means a plain with fennel. The bulb is also similar in appearance to hemlock. Best to keep sourcing it from Waitrose or the like. 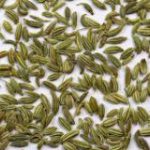 In addition to the bulb, one can use fennel in seed form, or the feathery frond like leaves, which are similar in appearance to dill. In short, a lot of versatility. The Italian classic cook book, The Silver Spoon, lists no fewer than 22 fennel recipes, including a pie recipe and an en croute version, in addition to the more common braising or roasting. Most dishes will be using the so called Florence fennel, the irregularly shaped bulbs. According to The Silver Spoon, bulbs are either male (round) or female (elongated). We are also told that the former are better eaten raw, while the latter are better cooked. Who knew? Certainly not I.

To prepare a bulb, wash it, remove the stalks and tough outer leaves and trim the base. You can half or quarter it and add to a tray of veg for roasting, drizzled with oil and seasoned with thyme or rosemary. When cooked that way it will resemble an onion. If your guests include a fennel hater such as Mrs J, do warn them. The aniseedy flavour (it is an important ingredient in the making of absinthe) is not to everyone’s taste. As with onions, cooking mellows the flavour. 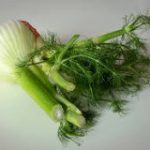 4 small fennel bulbs, trimmed and very thinly sliced (see below) (reserving a few of the fronds for garnish); 1 or 2 small oranges, peeled and segmented; 4 tbsp good olive oil (I use Orodeal); juice of 1 lemon; salt and pepper.

If you have a very sharp knife and good skills you could slice the bulbs by hand, but it’s much easier if you have a mandolin on the thinnest setting. Quartering the bulbs will make the task easier. Immediately after cutting mix with the lemon juice (otherwise the fennel discolours) and season with salt and pepper. I would use sea salt for this. Drizzle half the oil over the veg and leave in the fridge or in a cool place for an hour. If refrigerating, remove half an hour before service. Segment the oranges (we’ve covered this before, but there’s a good training video on You Tube at bit.ly/2q3ULFs). Add the rest of the oil, and check the seasoning. Garnish with the orange segments and fennel fronds.

Ingredients (serves 4, or more if used as a side veg)

Preheat the oven to 150°C/Mark. Put the oil and garlic into an oven proof pan with a lid, season the fennel and cook gently until lightly browned. This will take 10 – 15 minutes. Add the butter, wine and Pernod, and bring to the boil. Spoon the juices over the wedges. Cover the pan and cook until the veg are completely soft. Depending on size this may take about 45 – 60 minutes, but check and baste after half an hour. When done, sprinkle with the parsley and serve immediately.