Even as lockdown eases, life can still seem a little, well, humdrum. We may be able to eat out, but there is a definite lack of spontaneity. Even the simple pleasure of popping in somewhere for a drink is accompanied by someone (alarmingly) pointing what looks like a laser site at the middle of your companion's forehead. In what should be Edinburgh's busiest time, Festival month, streets are disconcertingly quiet. But fear not, I have a solution.

There I was, struggling and scraping with yet another recalcitrant sentence, when a volatile redheaded lady burst into our lives. For the past twenty years, Sudi Pigott has been taking the food world by storm, not only with her writing, but with the force of her personality. Her books include How To Be a Better Foodie and Flipping Good Pancakes: Pancakes From Around The World. I first encountered Sudi when I attended one of her food writing classes last year. She was getting stir crazy during lockdown, so we invited her to our (virtually self contained and socially distanced) guest suite.

I had known something of her back story, and you can find a little more on her website. I do have to say, however, that it doesn't really do justice to the body of her work. You will learn that she has published articles in newspapers from The Daily Telegraph to The Daily Mail, and you will discover that she has featured in Time magazine and the National Geographic. But until you engage her in conversation, you won't truly realise how much she has seen and done.

I had to press her for special memories. These included interviewing Joel Robouchon at the opening of his Japanese inspired restaurant in Monaco, and being encouraged by Michel Roux, Senior, to try her hand at clay pigeon shooting at Gleneagles. She takes justifiable pride in having been the first British journalist to write about Massimo Bottura, proprietor of Osteria Francescana in Modena, now regularly voted as one of the world's top restaurants. 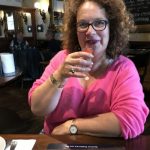 OK, you say, so she's a name dropper. Not so. The trip to Edinburgh was organised with about 48 hours' notice. The bush telegraph beats fast even these days. I was a little concerned about how to entertain her. Fear not, offers pour in. One day she is invited by Roy Brett to eat lobster at Ondine; the following day she is dining on grouse at The Kitchin. She and I have lunch in Leith. Neil Forbes of Café St Honoré, on a rare day off, spies her, comes over greets her warmly and invites her to coffee the following day. None of these things happens to Tom's Food!

I ask her about her own favourite writers. She cites Elizabeth Luard and Jill Norman. (Norman, incidentally, edited Elizabeth David's books for Penguin before turning to food writing herself.) And newish places to go in London? I asked. Once upon a time, of course, if you weren't in or near the centre you were nobody. Sky rocketing rents have seen to that. Read the top critics, and there is a fair chance they are raving about a couple of guys sending out really great food from a converted shipping container somewhere south of the river. Sudi's first recommendation is Trivet in Southwark. Someone up and coming? Well not exactly. Jonny Lake was head chef at The Fat Duck - perhaps he has less to prove than some. The next two choices are both in Mayfair. Sabor (flavour in Spanish, as good a name as any and better than most) was established by Nieves Barragan and José Etura. No prizes for guessing the style of cuisine. And Norma, featuring the food of Sicily. Head chef, Ben Tish - from Skegness.

And what about the up and coming? Another three names to watch. Anne Tobias, due to launch Cafe Deco in Bloomsbury in the autumn, Covid permitting; Tomos Parry of Brat (a less appealing name); and African chef Lerato Umah-Shaylor. I knew of Brat but not of the other two. Keep your eyes and ears open. You may be able to boast to your friends that you heard of them here first.

Life is never dull in Sudi's company. There are anecdotes a-plenty about people with surnames like Ramsay, Hartnett, Blanc and many more. This column is far too discreet to reveal details. Tom's Food! HQ is situated quite close to a well known Scottish football stadium. Had fans been allowed in, it's quite likely that Tynecastle Park would have been reverberating to the chant of There's Only One Sudi Pigott.