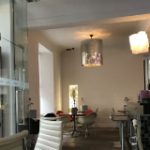 Once capital of Scotland, Dunfermline is one of the country's largest provincial towns and, arguably, one with the richest of histories. I lived there as a teenager and again in the 1980s and 1990s. I have an affinity rather than a love for the place, even if I am one of band of desperate people who follow the fortunes of its football team. Latterly my business was headquartered in the town, albeit well out of the centre. As I ventured in to meet a Glamorous Former Colleague, it occurred to me that I hadn't visited in the six years since I retired.

It had stood up well enough to the 2008 crash, Obviously commercial property development came to a standstill, but I had seen things starting to move again. Work has begun on the old silk mill/Dunlop factory on Pilmuir Street. Green shoots at last? After all the eastern expansion has seen a big increase in the poulation. That now extend as far east as the M90, where you will find one of the largest buildings ever built in the county. A monster of one million and one square feet - home to Amazon. Ah, perhaps there's the rub

Arriving early I went for a stroll, and wished that I hadn't. Shock doesn't begin to describe the reaction. Leaving the car park, I walked along Chalmers Street, what was left of it. Bridge Street? The few independent stores of quality are gone. Buildings that were once home to the largest legal firms are boarded up. Entire blocks where the only sign of life is from the charity shops. So it was in sombre mood that I bumped into the GFC in Canmore Street. Together we entered the oasis that is Fabric. Charlie Mohammed has been plying his trade in Dunfermline for a very long time, although you wouldn't think so from his irritatingly youthful appearance. Whether his business be a nightclub, bar or restaurant, you can be assured that it will always have a certain style, a bit like the man himself. Fabric is in a building which was once home to lawyers' offices and before that, inevitably, a bank. It wouldn't look out of place in the heart of any city.

Let's lift the mood. Dunfermline is well worth a visit these days. You are at the edge of the Historic Quarter as the area is now (quite rightly) entitled. You have the Abbey and the ruined Palace and Monastery. The birthplace of Andrew Carnegie and attached museum are much improved. It is hoped that the 15th century Abbot House will reopen, and next door the museum, a recent extension to the library by Richard Murphy, architect of genius, is a must see.  For more contemporary entertainment, along Canmore Street you have the Alhambra Theatre, restored by the energy of the Fletcher family, with reported plans for a further performance space  across the road. That's better. Positivity restored. 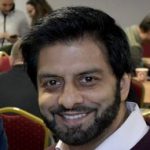 12 noon on a Monday may seem an odd time to lunch, but GFC is a busy lady. The waiter must also have thought it odd. At 11.15 I received a slightly anxious call enquiring whether it was a table for 12, as opposed to at 12. Unsurprisingly we were the first in, but not the last, everyone getting a cheery greeting to brighten up a grey day. The menu has something for everyone, and is a cut above usual town centre standards. Sadly my choices of fish cakes and lamb shank were both off, but at least it's reassurance that everything is made on the premises. I settled for Isle of Mullgoats Cheese Bon Bons (sic). Having had bad experiences with similar dishes at other establishments I certainly didn't expect as elegant a plate (well, actually, a slate) of food as has ever graced a Masterchef final. Smallish crisp balls of cheese, as light as a feather and completely grease free. They came with beetroot, pickled berries, raisins and nuts, with a few leaves gracefully arranged. If the Chicken Ham Hock Ballotine wasn't quite up to that standard, it was still pretty good. A green Thai curry tasted a little tame at first sampling, but the flavours built up gradually. Fish lovers who don't wish fish and chips are usually offered the ubiquitous sea bass, a fine beast, but over exposed. Not here. A generous chunk of pan roasted hake was served with a chickpea stew featuring chorizo and tomato. When I say generous, I mean just that. It really was too large a helping - but I scoffed the lot. Desserts were a fairly standard selection, ice cream, panna cotta, sticky toffee pud. If they are of the standard of the rest of the food on offer, they will be darn fine. GFC wondered aloud what the Cheesecake of the Day was. Monday, I replied. A very old joke (copyright The Royle Family from a decade or more ago), but funny when you hear it the first time. Ultimately no room for pud, but (good) coffee to finish with.

This is an establishement which is significantly more impressive than the surrounding town centre. Feeling the blues in Dunfermline? Go to Fabric and improve your day.