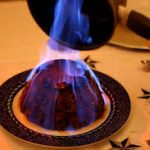 Flamber? It's what pyromaniacs do. Except, in Glasgow High Court they call it arson. But to flamber is simply the French term for setting on fire. With insouciant French style the Larousse Gastronomique explains that this is done both to enhance flavour and to demonstrate culinary showmanship.

Well forget the former. You can enhance flavour easily without a flame in sight, even when using the strongest booze known to man. Here we are talking swank, pure dead flash, or, to adopt the west of Scotland patois, proper gallus. And what's wrong with a bit of theatre? Chefs these days might like to care to think of themselves as artists, crafting pretty pictures out of their food. But how many punters, having been taken round a municipal gallery in hushed tones, wouldn't secretly have preferred to have been at the circus or the pantomime? That's what the art of flambé is all about.

An art rarely to be seen these days. Food fashions change, of course, and perhaps Health and Safety regulations. I also guess that many a drafter of a fire risk assessment may think herself better off if it doesn't involve a flambé twice nightly. And if reading this article makes you want to try it at home for the first time, please, please, I beseech you, think very carefully about what you are going to do and where. More of that later.

Actually, many of us may attempt this once a year. A traditional Christmas pud is great served with flaming brandy. If you have done it, you will have been aware of the frisson of danger, with the risk of setting alight the tablecloth/the Christmas tree/at least one of your grannies. And if you tried and didn't succeed, it's because you didn't warm the spirit in a pan.

But back to conflagrations. They're not just for TV chefs to show off. It does still happen in professional kitchens - a splash of brandy with prawns say, or to add flavour to the basic building blocks of a lobster bisque. One advantage is that you know when the alcohol has burned off, as the flames subside of their own accord. But remember that pro kitchens are cunningly constructed with a complete lack of flammable materials. The flame can easily shoot up a metre and more. What do you have in your kitchen that might catch fire? (Please tell me that no one has polystyrene ceiling tiles any more.) If in doubt, just let the booze bubble away for a minute or two with no naked flame in sight.

I think the practice of cooking and flambéing at table started in the grand dining rooms of the late 19th and early 20th centuries. It certainly continued through the 1960s, when I was first being taken to eat out. The flames subsided in the 70s or 80s. Crepes Suzette (pancakes in flaming liqueur) was a table side favourite, as was today's first recipe, Steak Diane. The lattter is still a lovely dish today if you like a creamy sauce. Once seen all over the land, unlike today's second dish, Cobra Coffee. 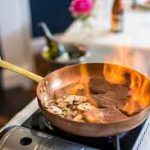 Although it needs fillet steak, you can keep the cost down (relatively) by starting with a very small piece of beef, as you will be flattening it out. To prepare the steak flatten it a little with the heel of your hand, then place on a board between two sheets of clingfilm and bash to a thickness of about ¾cm. Do this gently - do NOT use one of these studded meat hammers - there is no need to tenderise fillet. It's a very rich dish, so you can get away with a relatively small steak unless you are feeding greedy-gormies. You do need double cream as you will be reducing your sauce. Single cream would split. Elmlea is fine for non cream eaters.

Flatten out your steaks as above, making sure they are at room temperature. Rub both sides with the cut surface of the garlic. Season both sides well with salt and pepper, then spread the mustard on one side. With a little oil in a hot frying pan, sear the steaks for about a minute on each side, mustard side down first. Then remove the beef to a side plate and reduce the heat a little. Melt the butter and soften the shallots. Add the mushrooms and cook for another minute, stirring them well into the butter.

Return the steak to the pan, increase the heat and get ready to add the brandy. Revisit your risk assessment. It is not necessary to flame your brandy - you can simply bubble it. If you do decide to light it, keep your face well clear of the pan. Add some Worcester sauce, then add the cream and allow to bubble over a high heat to get the sauce to the consistency you want. Adjust the seasoning with salt, pepper and possibly a little more Worcester sauce

Your steaks will need no more than four minutes in total (including the time for the initial sear). If necessary remove them to a heated side plate while you finish the sauce. I like to serve with some very crunchy sauté potatoes and a green veg. 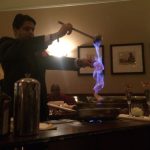 I'll be interested to know how many of you have ever heard of this, let alone seen it being made. I have encountered it in but one establishment in the world, an Indian restaurant in, of all places, Dunfermline. As a spectacle, this is extraordinary. The lights were dimmed and a packed 200 seater restaurant fell to a hush.

I have never made this at home, so you'll have to use your judgment, depending how many glasses of coffee you want to get, and how big your frying pan is. The "cobra" is represented by the peel of a large orange, taken off in one single strip. You will need a frying pan, heavy enough to make caramel and large enough to hold the coffee and the booze, tongs to hold the cobra, a separate pan to warm and flame your liqueur, and a small ladle to pour it. This is best served in glasses, but they will have to be heat proof, the type you used to serve Irish coffee in, if you're old enough to remember that.

1 large orange, peel removed as above; enough brown sugar to form a complete layer on the base of the pan; black coffee, enough to get the right balance between the caramel and the coffee; 1 measure (about 50 ml) brandy; Cointreau or Grand Marnier - allow about 30ml per cup of coffee, but you'll need at least 200ml to get the dramatic effect; double cream, (optional).

Sprinkle the sugar over the base of the pan and heat over a medium to high heat until it caramelises. Add the shot of brandy and juice of the peeled orange, then top with coffee and stir together well. Now for the fun part. Warm the orange liqueur gently in a separate pan and set it alight. Using tongs, hold the orange "cobra" by the head over the frying pan. Ladle the liqueur over the peel. The flame will go down the length of the peel and, as it drips into the pan, will cause little flames to bubble up from the surface like flaming lava. Continue until you have used up all the liqueur an there is nothing left to flame.

Serve in glasses. If anyone wants cream, pour it in carefully over the back of a teaspoon, so it floats in a layer on top.

It's usually quite easy to find a reference to anything online these days. Researching it online, I could find only one other reference. This was in an article by journalist Matt Viser, describing dinner in a swish joint in Boston, Massachusetts. Click here for the link. The full article (which you have to sign up to read)  actually has a video of how to make it.