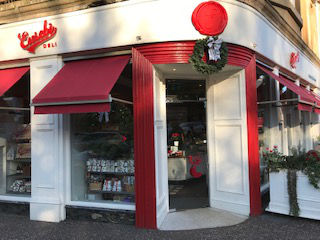 A long, long time ago, in a place very close to here, my middle daughter graduated. In keeping with splendid tradition, the entire assembly belted out a chorus of Gaudeamus igitur, juvenes dum sumus. (Let us rejoice while we are young.) Aware that a classical education is an endangered species, a cheery academic taught us the words and tune in advance, ensuring we were well rehearsed by the time the juvenes filed in.

Eusebi Deli wasn’t here at that time. Owner Giovanna Eusebi acquired the premises about 12 years ago, intending to move from the family’s long established base in Shettleston. There intervened a series of unfortunate events which would have deterred a less determined owner (planning issues, floods, recessions, you know the sort of thing). Happily it opened in 2015, and is probably the best food destination in the West End of Glasgow, if not in the whole city. A deli it most certainly is, stuffed full of the finest goodies from all parts of Italy. Displays of cakes don’t usually do much for me, but the selection here is masterminded by Helen Vass, part of a team which won the professional version of the British Bakeoff competition.

I had heard about it, but despite its numerous awards had made no plans to visit. Deli food is great, but restaurants are more my thing. Well, not for the first time, I found myself as wide of the mark as hitting the 17th green after teeing off at the 1st. (In my golfing days, this was known to happen.) Yes, you can go for a sandwich or a snack or a pizza, but (and this is the best advice you will get from me all year) go for a full lunch or dinner.

I went with Robert C of Mr C’s Pies fame. He knows the family well, but it was booked under my name and no one in Glasgow knows me from Adam. Front of house man Michael’s smile would warm up a roomful of Wee Frees forced to watch a Celtic v Hibs match. Service was by a bevy of delightful ladies in jeans and stripy tops. If I single out Lucy, it’s because she looked after us most of the time. Then Giovanna spied Robert and came out to chat. A delightful ten minutes (some of it in Italian, to Robert’s discomfiture). She spent 10 years working for British Airways (back in the day when it had a great reputation) and credits that experience for learning much about customer care. Truth be told – with charm like hers she’s a natural. That charm permeates the whole place. I’m just sorry that my service score can only go up to 5.

We started with a couple of amazing plates, compliments of Giovanna. Freebies, I hear you cry? Well, yes, but for Robert, who kindly let me share. I’ve had fried pasta once or twice, but only as a sweet version. Ravioli carbonara were a revelation, crunchy and comforting. But they took second place to a dish of confit tomatoes, matched up with some really good burrata (mozzarella stuffed with stracciatella and cream) and some lightly pickled fennel. Beyond stunning. The black truffle fettucine wasn’t available, so pappardelle with goat ragù stepped in. The difference between a basic pasta sauce and a ragù? In this case, about 11 hours. Giovanna is a confirmed fan of the Slow Food Movement.

A week or two ago I complained about scallops which had been drowned with a salsa. Come here and find out how it’s done. Anchovy and a pistachio crumb could be flavour killers, to say nothing of a salmoriglio vinaigrette. (The latter is an old Calabrian seasoning comprising lemon juice, olive oil, garlic, salt, and herbs.) The result? A herby hit first, then the sweetness of the huge and juicy scallops kicks in. At twelve quid for two not inexpensive, but heaven doesn’t come cheap.

To mains. The advertised veal was off – I love it when menus change because the kitchen is determined to serve only the best – and was replaced by beef cheeks. Another slow cook, obviously, but melt in the mouth falling apart stuff, perfumed with a pesto variation which both Robert and I inaccurately identified as thyme – it was in fact oregano. Fettucine or linguine with seafood is a classic dish, but often overrated and overpriced. I defy anyone to sample this version, the former with lobster, and not emit noises of fervour to rival the Hampden Roar of days of old.

Ms Vass’s sweet treats will have to wait for another day, but the coffee, unsurprisingly, was excellent. I don’t usually mention wine, but an exception here. To accompany this feast we sampled Soave with the shellfish, Primitivo with the meat and grappa with the coffee. Each one of these was the finest example of any I’ve tried, and not greedily priced.