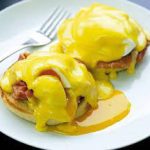 The original plan for today was to give you a stollen recipe; however, that would have been three sweet things in a row, and I haven't had time to test it. Next year, perhaps. So, staying seasonal, what shall we have?

Over the next two or three weeks, eating patterns will change for many of us. In a lot of houses there will be guests staying over. Late breakfasts and brunches may become more common. And with it being the festive season we'll maybe try and put in a bit more effort. Eggs Benedict is one of my favourite luxury breakfast dishes. Toasted English muffin, ham, poached eggs, Hollandaise sauce. What could be simpler? Er, quite a lot of things. But before we cook it, let's look at the history..

That it is American in origin seems to be beyond doubt. As with many dishes there are competing claims. The celebrated Delmonico's in New York say that they started serving it in 1860. Their menu used to state, Eggs Benedict was first created in our ovens in 1860. Trouble is, you don't make most of the components in an oven, and there's no explanation of the name.

I rather like the story told by retired banker Lemuel Benedict. In an article in 1942, he told The New Yorker magazine, that one day in 1894 he had had a bad hangover. Going into the Waldorf Astoria hotel, he ordered buttered toast, poached eggs, crisp bacon, and a hooker of hollandaise. Apparently the maitre d' was so impressed he put it on the breakfast and lunch menu, substituting ham in place of the bacon, and a toasted English muffin for the toast.

Slice the muffin horizontally and toast. To butter or not to butter - your choice. (I do). Top each half with a slice of ham - and I do mean good quality ham, not the really thin, sweaty, slimy stuff.

Poached eggs - A lot of people tell me they have problems with poaching eggs. There are a couple of things to remember. Your eggs should be as fresh as possible. Secondly, there can be issues getting them into and out of the pan. I use a wok for cooking and break the eggs into a ramekin, holding that as close to the surface of the water before slipping them in.

Get the water to simmering point. Add a capful of white wine vinegar, but no salt. Give the water a swirl to create a whirlpool effect and cook the eggs for 3 minutes. Remove and drain well. Season with s & p.

Put the vinegar, pepper, bay leaf and mace if using, in a small heavy pan and reduce by two thirds. You should be left with a teaspoon of vinegar. Have a strainer handy. In a small heatproof bowl cream together the egg yolks, a tiny amount of butter and a pinch of salt. Set the bowl over (not in) a pan of simmering water. Beat in the strained vinegar. Add the butter a little at a time, beating all the while. When the sauce is light and thick, remove from the heat. Add a squeeze of lemon juice and season to taste.

Don't worry. We are not going to be using the horrors that are bottled Hollandaise, or stuff that starts in a packet. Start employing that muck and cancel your subscription to Tom Cooks! forthwith. Let's pause for a second to analyse the so called classic version.

An English muffin - what exactly is it? A yeast enhanced runny dough, put in moulds and cooked in a pan. Named an English muffin to differentiate it from these ubiquitous vile mountains of sweet stodge, nowadays made the same size as a baby's head. Similar to a crumpet, the main difference being that a crumpet is made with milk. But here's our problem. I don't recall ever seeing a muffin in a traditional baker's - not that I frequent them much. That means that most Eggs Benedicts use these horrible prepackaged things, stuffed with preservatives so they keep "fresh" for weeks. Give me toast any day.

I know that many of you are nervous of making a butter and egg style sauce. While it's not that difficult, it's volatile stuff. Even a perfectly made one can split on you if you are careless keeping it warm. So here's my radical alternative - do without it altogether.

Whit! I hear you exclaim. Eggs aside, Hollandaise is mostly butter, with a touch of vinegar. Some recipes include a teaspoon of Dijon mustard. So slather a lot of butter on your toast, spread some mustard on your ham and, provided your eggs are nice and runny, you'll have a very nice dish.

Toast the bread and apply a layer of butter, which will melt. When the toast has cooled a bit, add another thick layer of butter. Top with the ham, and spread the mustard over the ham, as much or as little as you please. Put the eggs on top, season to taste and puncture the yolks. Lovely!

In place of the ham, use sauteed spinach, well drained.

Use smoked salmon instead of ham.

Tom Cooks! will return in the New Year. Best wishes to all.