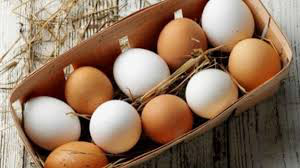 Hmm, I wonder what the E might possibly stand for in a food alphabet? For those who follow me on Twitter, I often have a teaser quiz a day or two before. Not this week. I did think about being really sneaky and featuring eel or éclair or endive, but you would probably have taken me off your Christmas card list. I certainly could have confused you with écossaise. According to Larousse Gastronomique sauce écossaise comprises very finely diced vegetables and French beans (a Scottish staple) in a cream sauce. Who knew? Tellingly, Escoffier is silent on the point.

Not only am I going to be prosaic and stick to eggs, I am narrowing it even further and sticking to the most common of the lot, the hen's egg. I suspect there are theses by the million which could be written. As ever, I prefer to stick to the irrelevant and the valueless. About 77 million tonnes are produced annually. China is by far the largest producer, with anywhere between 34% and 40% of the global total, depending which statistics you prefer. To my surprise, the USA has only about a fifth of the Chinese total, followed by India.

I'm not going to get into the horrors of battery farming. If you want to know more read about Hugh Fearnley-Whittingstall's campaign. Please, please, buy the best quality eggs you can afford to help eradicate the worst practices. Equally, I wasn't planning on getting into too much science, but read on. As cooks, especially those of us who aren't chemists or biologists, we can only marvel at the wonder of the egg and its culinary variety; however that did get me doing a little more research and contemplation.

In my lifetime there are relatively few foods whose fashions haven't fluctuated wildly. Eggs are a great example. The superfood of the 1960s. Some may remember the slogan, Go To Work On An Egg. (Yes, that was produced by the Egg Marketing Board. Claim 10 points if you knew it was written by a young advertising copywriter named Fay Weldon, now better known as a novelist and playwright.) Then the egg was reviled because of its cholesterol content. That was the reason for the abomination that is the egg white omelette. The nadir in the ovicular fortunes came with the salmonella outbreak in the late 1980s.

Today, all eggs with the British Lion stamp come from hens which have been vaccinated against salmonella. A 50g egg contains 70 calories. While half of those calories come from the fat in the yolk, half of the protein is to be found in the albumen. They fill you up, and they present limitless possibilities. A traditional chef's hat or toque has 100 folds, symbolising the number of ways he knows how to cook eggs. More of that on Friday.

As ever with these alphabet columns, many nuggets of information are uncovered. Allow me to share some in the form of FAQs (that's Frequently Asked Questions, in case you thought I was being rude this early in the year).

Are brown eggs better than white?

Other things being equal there is absolutely no difference. If you pay more for brown you are being diddled.

How can I tell if my egg is fresh?

An egg contains an air sac at one end. It is very small at the outset and gets bigger as the egg ages. Put your egg in a pan of cold water. If it lies horizontally at the bottom it is fresh. A bit older it will float at an angle, then vertically. Even at that stage it should be edible, but if your egg floats completely then it probably needs to be chucked. If in doubt, break it - your nose will tell you.

Should I keep my eggs in the fridge?

This got me scratching my head. I don't and, perhaps most tellingly, supermarkets don't display eggs in a chilled area. So why do fridges come with egg holders? This is because of the US market. In the States, commercially produced eggs are washed and disinfected. This has the effect of removing the outer layer of the shell known as the cuticula and makes refrigeration necessary. In most of the EU this washing process is illegal.

Last week's column was about avoiding culinary mistakes. Here are a few egg related ones.

In conversation I encounter many who say they can't poach an egg. In theory, it's very simple. Break an egg into barely boiling water, remove after 3 minutes et voilà! There are a few reasons you may be getting it wrong.

Many people complain their scrambled eggs are like omelettes and vice versa. Perfect scrambled eggs should be creamy and slightly runny in texture, with slight variegations in colour. They take quite a long time (up to 15 minutes) to make

Although, at its most basic, an omelette has the same ingredients as scrambled eggs, namely eggs and butter, the technique, especially with the application of heat, is the polar opposite. I assume you know the basics. Forget the crap you see in the appalling, so-called Omelette Challenge on Saturday Kitchen. Little that was edible ever came out of that and certainly nothing resembling an omelette.

There now, that wasn't hard. You can now do the basics like an expert (I want a point for resisting the temptation to write eggspert). Some more recipes on Friday.