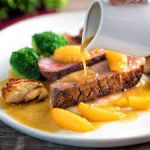 Virtually everyone has their favourite Del and Rodney memory. For most it will be the scene where David Jason tries to lean nonchalantly against the bar, only to discover that the counter had been raised. Great stuff, but I'm still tickled by their French trip. Del, thinking ahead to dinner, asks, What's French for duck à l'orange, Rodney?

Now I'm sure I must have cooked this before, but I just can't remember when. Truth be told, duck hasn't featured much in my repertoire until relatively recently, and that's usually been in the shape of duck legs. Wild teal has spoiled me for roast farmed duck, but I had a pack of two breasts in the fridge, so what to do?

As a starting point for anything quintessentially French, I generally turn to Mastering The Art of French Cooking. These days the book tends to be credited to Julia Child, but she was ably assisted by Simone Beck and, less ably, by Louisette Bertholle, who was dropped for the second volume. The Caneton à l'Orange recipe? All good, ladies, but it requires a whole duck, a pint of duck stock made some time earlier, and a caramel. Perhaps not. So I called Dr Google and came on a recipe which I adapted for today's feast. It originated from Gresshingam, the company which produces a lot of the duck we find in our supermarkets, indeed, the producers of today's raw ingredient.

This time last year, when I was presumptuously advising you on how to improve your cooking in 2021, I declared that a hot pan was an essential for meat cookery. Yes, but not if the meat is duck, especially breast of duck. The reason is that duck breasts have a very thick layer of fat. Put these in a hot pan and you'll either leave most of the fat unpleasantly raw or horribly burnt. You want the combination of a crispy skin and nicely rendered fat. To achieve that put the breast skin side down in a cold frying pan (no oil) and turn the heat up to medium. Cook for about 6 - 8 minutes. After a few minutes you may want to increase the heat a little, as you want a crust to form, and the meat not to be sticking to the pan. You'll have to pour off surplus fat once or twice. Reserve it for cooking tatties another day.

The cooking times below resulted in a breast which was only slightly pink in the middle. If you like it pinker I'd give it 3 minutes in the oven, then just a minute or two after glazing.

I used less honey than in the original recipe. The end result wasn't as sweet as I had feared, thanks to the garlic and the thyme, but I'm still not sure what wine you would serve with it.

Peel and segment one of the oranges. (We've done this before. If you can't remember how, click here.) Zest the other orange and squeeze the juice. Reserve the segments, zest and juice for later.

Preheat your oven to 180˚C/Mark 4, and put in a roasting tray to preheat. Carefully dry the duck breasts. Score the skin and season on both sides with salt and pepper. Put the breasts skin side down in a cold frying pan, then increase the heat to medium. Cook for 6 - 8 minutes until the skin is golden. Remove the surplus fat from time to time. Turn the breasts and cook the other side for 30 seconds.

Place in the roasting tray, skins side up, for 3 - 4 minutes. Put the cooking pan back on the heat. Add in the orange juice and zest, garlic, thyme and honey. Bubble gently to reduce the liquid by about half. Add the segments and continue to simmer until the sauce is sticky. Set to one side. Take the roasting tray out and brush the duck skin with a couple of layers of the pan mixture. Return to the oven for another 2 - 6 minutes, depending how you like your duck. (See above.) Remove to a warmed plate, cover loosely with foil and allow to rest for at least five minutes.

Make sure the sauce is hot. Slice the breasts into four or five pieces before dishing up and covering with the sauce and orange segments. The Gressingham recipe suggests cooking potatoes and adding them to the sauce at the same time as the segments. I prefer them done separately. Sautéed would be traditional. I served the duck with some steamed pak choi seasoned with dark soy sauce, but any quickly cooked green veg would do.

I should point out that this technique is relevant to the farmed duck breasts which one gets in supermarkets. Nothing at all wrong with these, but wild duck is likely to be much leaner, in which case the cooking will be quite different.