With current reviews impossible, It was fortuitous that I came on the diary of a long lost relative, Binkie Johnston. This is his account of a memorable dinner.

Well, the Doc had been badgering me about the old vital organs. A bit of sea air, old chap, is what you need.

So I packed the toothbrush and tux, and before you could say Lloyd George is your great aunt, here I was in my stateroom on this old tub. Well, when I say old, I obviously mean brand new. In fact pretty darn swish.

So there we are just a few days out of port, and who should I bump into but old Biffy Bassett, some distant relative of Madeline if memory serves. Not so much well heeled, as loaded, not to say downright stinky. Good Lord, Binkie, you on board too? Having a little private dinner tomorrow. Just a couple of dozen or so. Come at 7 - I'll send your man the details. Just remember, this isn't the Drone's. No bread roll chucking.

The next evening came pretty soon. Scrubbed and best bib-and-tuckered I presented myself as the clock struck. Quite a set up. Turns out Biffy's a director of the company that owns the boat. Dinner started pretty well. One steward for every two chaps. Mine was a Scotchman name of McTavish. A bit on the gruff side, but eased up as the night wore on. Was expecting the usual dry sherry, so the Krug '99 was bit of a surprise. Biffy has certainly done well for himself. Needed another glass to steady myself when I saw the menu. 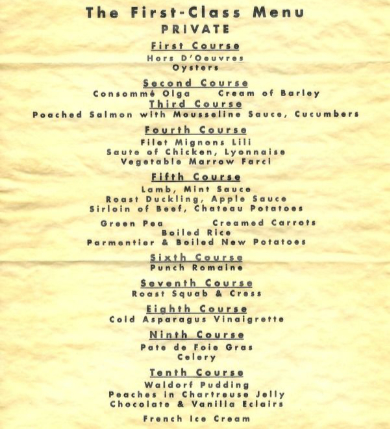 Blimey! Don't worry - I didn't have to eat everything. Just one choice from each of the ten courses. Don't want you to think I'm some sort of glutton.

Oysters - popped down the hatch. Then a thought occurred.

-McTavish, where do you get fresh oysters in the middle of the Atlantic?

-We keep a tank of them in the bilges, sir.

-What's Consommé Olga? I whispered, not wishing to seem some sort of ass.

-Chef has a lady friend name of Olga who's partial to a scallop. It's just ordinary consommé with scallops at the bottom. You know what these French cooks are like.

Then we polished off the fish course, salmon with a mousseline sauce. That's a sort of Hollandaise with cream in it, in case you were wondering. Courses four and five? Bad form, chef, I would say to get a fellow to eat Filet Mignon Lili followed by sirloin.

-Has chef got another fancy bit called Lili? I asked McTavish.

Well that slipped down a treat. I sidestepped the sirloin and scoffed the duck with apple sauce. Half way through, then we struck another problem.

Well, that eased the pressure on the waist band. Course seven beckoned. A ghastly thought occurred to me about the squab. Surely they don't have a pigeon loft on board?

-McTavish, can I ask you something in confidence? Can you tell me if the kitchen has a guilty secret. Is the pigeon by any chance tinned?

The man positively bristled. Very sorry, sir, no can do.

It was decent enough. I wolfed it down, then the asparagus slid over nicely. First of the season. After Lili's fillet, I could have done without seconds of foie gras, but couldn't let the side down. Nearly there.

So to pudding. For once I didn't have to bother McTavish. Waldorf Pudding? I knew about that from the time that Roddy and I went to New York and stayed at the Waldorf-Astoria on Park Avenue. It has apples and walnuts and that sort of stuff. That was the time when Roddy and I got frightfully squiffy and... but maybe that story's for another day. Didn't fancy the Waldorf - I was pretty stuffed by that stage, I can tell you. Positively struggled with the third éclair.

Chatted to Biffy over brandy. You lose track of time when you're at sea.

- Tuesday all day, old man. Tuesday 14. Will you join me at the Captain's table tomorrow?

Crikey, I thought, as I staggered back to the cabin. If they're going to feed me like this every day it's going to be a very long voyage. 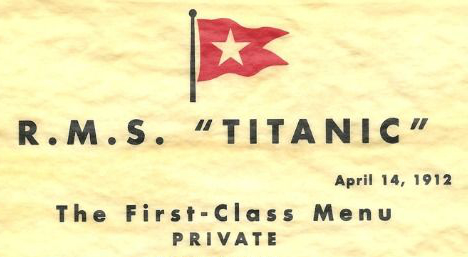 To find the recipes for some of the dishes from Binkie's dinner, see today's Tom Cooks!