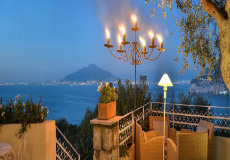 Driven to distraction by the summer’s incessant rainfall, my wife sought solace in technology. Thus it was that a brief three weeks later we found ourselves on a very winding road up from Sorrento, arriving at the Grand Hotel Aminta. To be frank, it looks nothing from the front, and the reception isn’t overly ornate. Just shows how you can be fooled. It’s a very good four star hotel, with lovely staff. The opposite side is the extra star, a beautiful panorama overlooking the Bay of Naples, with Vesuvius standing guard behind. There is a terrace leading to the pool and an elegant outside bar. By day you barely notice the 15 or so tables which comprise Dafne.

Eating out in Sorrento itself poses certain issues, as is the case in any Italian tourist town. Finding the difference between good and the slapdash is a road strewn with potholes. I looked at Trip Advisor. With a few egregious examples, I find it reasonably reliable if used with care. Since social media are used by a greater percentage of the young than by us mature types, there can be great weight given to budget places. I was therefore surprised to see our Dafne right up there at number one. We booked for Sunday night.

It’s dinner only, and weather permitting. Weather is not generally a problem in July. What is more of a problem is when, come the time of your reservation, Federer and Djokovic are still going hard at it, and England and New Zealand are going into a super-over. Even putting things back by half an hour we still missed the climax to both. I’m not going to try to explain a super over, but a word or two about our Dafne/Daphne, unfortunate naiad (nymph) that she was. Being about to suffer a fate worse than death at the hands of Apollo, she asked Peneus, her river god dad, for help, and he turned her into a laurel tree. Don’t try this at home.

Anyway, we sit ourselves down at 8, and wait. Nothing happens for 20 minutes till we get some bread and home made olive oil. I should say that, thus far, we have been pleasantly surprised by the hotel’s pricing. When you’re a 25€ taxi ride from a town (although there is an hourly shuttle bus), you do fear the worst. Unfounded fears – until now.

The first page of an over long menu proclaims a tasting menu – 140€ for four courses. Spluttering quickly on, we order food and wine, and wait. And wait. Forty minutes later two cold starters appear, with no sign of the wine. We had to remind them about it. A prawn cocktail was OK, but, considering what we had seen on sale in the fish shops, unremarkable. Octopus and potato salad, on the other hand, was a disgrace. A huge mound of chopped cephelapod, surrounded by slices of cold boiled potato, with two or three halved cherry tomatoes on top, seemed to be completely devoid of seasoning. The addition of copious amounts of salt, pepper and oil (there was no lemon to hand) made it edible. No questions were asked when two thirds of the dish was left uneaten. To mains. The advertised vegetables with the millefoglio of swordfish may have been crispy once, but not on our plate. When describing layers of puff pastry one may suspend disbelief to believe there may be a thousand leaves, but not when the millefoglio comprises three thin fish fillets. Saltimbocca was some indifferent veal. It was indeed topped with prosciutto as it ought to be, but the sage was missing in action, and I’m not sure how much marsala had made it into the gloop. The accompanying veg had clearly been cooked at least an hour earlier.

Service was on the surface Italian smooth, albeit at work to rule speed, but the quality of the muck they were serving up obviously depressed them too. As the evening was cooling we thought a digestivo in the inside bar would be the thing, with the picture windows framing perfect moonlight views over the bay. It was empty, save for one: the owner, watching a giant TV. A sign said, Closed – Pool Bar Open.

Trip Advisor, hang your head. And, alas, poor Daphne. Dining here or being turned into a laurel tree? Tough call.