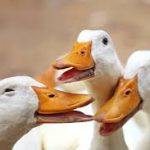 I started this article looking to escape from the misery of a dreich and wet Sunday. Some hours on, with the brain nipping, I'm really wishing I hadn't. The source of my perplexity (at this stage I neither know nor care whether that is a real word) will become clear later. So let's begin with the bleedin' obvious.

The word duck comes from the Old English word dūce meaning diver. The linguists among you will be fascinated to compare that with the Dutch word duiken, the German tauchen and indeed our own Scots word dook. But for duck as a culinary delight we must travel east and go back a couple of millennia. You will not be surprised to learn that our destination is China. It is known that ducks were roasted in the time of the Southern and Northern Dynasties (386 to 589).

The earliest written reference to roasted duck, shāo yāzi, was in the Complete Recipes for Dishes and Beverages manual produced in 1330. It seems unclear precisely when the world's most famous duck dish, Peking Duck, was created, but the original ducks used came not from Peking, but from Nanjing which was then the capital. They were small black beasts with relatively little eating on them. In modern times the dish is prepared using, you guessed, the Pekin (not a typo) Duck. From Nanjing, you ask, or from Beijing itself? Well no, it's a cross between a little white bird and an Aylesbury duck, from which the Long Island duck, America's most common breed, is descended. More on Peking Duck in Tom Cooks! on Friday. 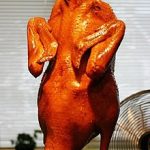 Most farmed ducks in Britain are from Aylesbury, Gressingham or Norfolk breeds. Generally these are descendants of the wild mallard. Here in Scotland we are fortunate to have fairly easy access to wild duck. Mallard is the most common, but if you can, search out the smaller and tastier teal. Unlike most game birds duck doesn't benefit from being hung before cooking.

How to cook a duck? Well, what do we Brits excel at? Roasting, of course. And this is where my head really started to hurt. On Friday I will give one or two fail safe recipes, but I have had mixed results with roast duck over the years, just as I did until recently with the likes of pheasant and grouse. So how do we do it? Here, for your benefit, are the results of my researches.

*I use metric measures for everything, but when roasting I still revert to my own early training of x minutes to the pound, and have to convert my scales. 1 kg = 2.2lb 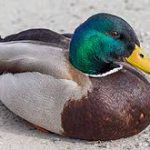 All of these are books by well respected food professionals. Is it any wonder that a wee amateur blogger has to pause at this point to wrap his head in a damp towel? I'll leave the last word to my good chum Norfolk Rapscallion. For an average sized mallard cooked pink, he recommends 15 minutes at 200°C/Mark 6, then 15 - 20 minutes at 180°C/Mark 4, plus 10 minutes resting. That sounds about right for a pink finish. But fear not, there are easier ways to enjoy what is one of the tastiest of birds. Don't miss Tom Cooks! on Friday.