Scotland, we are told, produces the finest soft fruit in the world. We do, do we? Well, not on the basis of the strawberries I've had this year. At the beginning of the season the quality  could be forgiven because of the lack of sunshine: no such excuses now, and I still haven't 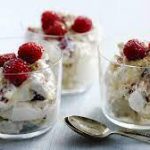 had any which would score more than a 6 out of 10.

Raspberries? Now that's another story. Here our generally unremarkable summers seem to bring out the very best from these slightly tart drupelets* of pleasure. As with all the finest of summer berries it can seem a shame to do too much other than serve them with some ice cream. yoghurt or creme fraiche, but if you want to tart them up, you can do a lot worse than to go for the Scottish classic, cranachan.

It's not a dish which is ever made in our house, for two reasons. Firstly it contains cream, and secondly (whisper it) neither of us likes whisky. So, much research was required to bring you today's delight. Shouldn't be hard, I thought. It's just a combo of raspberries, oats, cream and whisky, plus something to sweeten it. I discovered, however, that cranachan is something of a metaphor for life. It's not that straightforward.

Let's start with the easy part, whisky. Simple. Shall we move on? Well, Nigel Slater's recipe very specifically mentions malt whisky. I really have no idea why. If your store cupboard just has a bottle of Famous Grouse from last new year, feel free. Mark Greenaway sensibly counsels you simply to use your favourite whisky. That really should be the end of the chapter, but go back almost a century to F Marian McNeill's famous The Scots Kitchen: Its Traditions and Lore with Old-Time Recipes. Bizarrely, in a quintessentially Scottish recipe our Marian tells you to use rum. Some may call this perverse: I just think, why not?

To the oats. What type should you use? Rolled oats, say some, pinhead oatmeal, say others. Medium or coarse? It depends on the texture you want. Tom Kitchin apparently uses granola. There seems to be unanimity that the oats should be toasted until warm and nutty. Nigel Slater simply browns his for a few minutes under a hot grill. You could use a dry frying pan. Others stipulate a slow bake in the oven. Mark Greenaway mixes 60g of oats with 40g of caster sugar before toasting. One recipe which I have seen suggests soaking the oats overnight in whisky. I think this would make them soggy, whereas the crunch is an important part of the dish.

Sugar would be anathema to many. The majority of recipes stipulate honey, preferably heather honey. It sounds more traditional - then again so does the whisky. Whichever you choose, it's there to sweeten the cream, unless, of course you're being really true to the original, in which case you'd be using crowdie, a Scottish soft cheese. It appears to be the case that cranachan evolved from a popular breakfast dish of crowdie mixed with oatmeal.

Next, to the berries themselves. Some recipes suggest making a purée, reserving some whole fruit for decoration. Doing that you lose out on some texture. I've adopted Nigel Slater's idea of crushing half the fruit. The raspberry season is relatively short. Sue Lawrence suggests using brambles (blackberries) later in the year. I don't see why this couldn't be adapted using other soft fruit such as blueberries; however, the tartness which you get from rasps is a fine counterpoint to the other ingredients.

Finally, the assembly of the dish. Some commentators say that you should simply serve up the individual ingredients and allow guests to assemble their own, the rationale being that the oatmeal won't lose its crunch. That doesn't get my vote, but don't make it up too far in advance. Serve in glass dishes.

Toast the oatmeal in an oven, under a grill or in a dry pan, until it browns and smells faintly nutty. Allow to cool. Crush half of the raspberries, with a fork. Work out how many whole rasps you'll need for topping (this will depend on your serving dish and your presentation style) and set them aside. Whip the cream until thick then stir in the honey and the whisky. Taste as you go - you may prefer your mixture to be sweeter or boozier. Gently fold in the crushed raspberries and any remaining whole berries. Note the use of the word fold. You want to have a nice ripple effect. Finally fold in the toasted oats. Spoon into serving glasses and decorate with the remaining raspberries. By all means make in advance, though not too far, but don't over refrigerate.

*I didn't make this word up. A raspberry is what the botanists call an aggregate fruit, made up of over fifty little berries or drupelets.