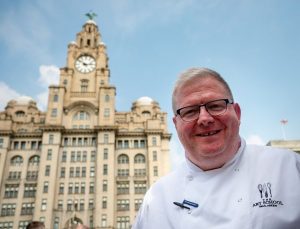 This year I celebrate forty years in the hospitality business, starting as a 15 year-old kitchen porter.

Singapore provided me with one of my first and greatest inspirations to become a chef. I travelled with family from a very early age and was exposed to the markets and hawker centres of Singapore which, with its vibrancy of colours and flavours, was literally like being in an Aladdin’s cave – it’s like the New York of Asia! The freshness of the seafood, vegetables and meats, the experience of having food cooked in front of you while you watch, the aromas, the theatre of it all just made me want more and more.

It’s hard to pick one single ingredient as I love and use so many, but I suppose the one I reach for first and use most often would be Maldon sea salt flakes. Otherwise, I like to cook with whatever ingredients are in season and at their best. 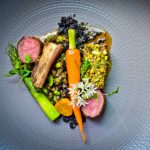 It’s really difficult – after 40 years there have been so many! I love fresh seafood at any time of year and game during the season – both feather and fur! But the dish that could be considered to be my signature would be my dish from Great British Menu named ‘Memories with Marjorie’ after my dear Mum. It was an assiette of Hebridean hogget of four elements: hay-roast rump, sweetbreads, confit shoulder and loin. The secret was the braised pearl barley which was prepared in the cooking liquor from the shoulder. Daniel Clifford awarded it a 10. The dish remains an annual celebration of the local hogget and has gained a loyal following of diners at The Art School.

A recent discovery. A Konro Japanese grill which we now regularly use in service at the restaurant. Konro BBQs capture the great flavours that can only be achieved by cooking with charcoal and wood smoke. Cooking with charcoal gives the opportunity to add unique and delicious flavours and textures to food. The food is inches away from the charcoal and the juice that drips down is instantly evaporated into a smoky cloud of deliciousness that infuses with the food on the grill. The hot temperature is also perfect for creating crisp caramelised skins on chicken and other meats 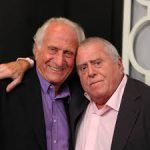 In my opinion the Roux brothers are responsible for the food revolution that has taken place in this country.  Their passion for local produce, the classical methods of cuisine that they introduced and the chefs they have trained, are an amazing legacy. The day I watched Michel produce a pithivier of pigeon with chanterelles for fifty guests from a kitchen the size of a metaphorical postage stamp was a revelation. And many years later having Albert presenting me with the Remy Martin Award was one of my greatest ever honours.

Anything that is made without love or the respect that good quality ingredients deserve.

I’m a diner of contrasts. I love simple, well cooked meals rather than elaborate food cooked badly (beans on toast topped with Montgomery Cheddar is a particular favourite) but if I’m treating myself I would start with a glass of Charles Heidsieck Champagne, then a turbot and lobster starter with a glass of Meursault, onto a venison Wellington and all the trimmings with a hearty Californian Ridge Monte Bello and then round the meal off with some Colston Basset Stilton with truffle honey and a glass of Dows ’66 port.

Haha! There’s a few that instantly spring to mind but I’ll give one of each.

A customer demanded that I leave the kitchen in the middle of a busy evening service to complain that I was using MSG and that he had found a piece of glass on a fish skin. I went to the kitchen and returned with a box of Maldon Salt Flakes which he’d never encountered before. The poor man looked very embarrassed in front of the guests on nearby tables.

My craziest kitchen experience was seeing a commis chef light a ‘pilot’ of an old-fashioned oven that was not switched to ‘pilot’ but had gas flowing through the pipes. I’ve never actually seen an oven door blown clean off and flames wrap around a moustache and beard quite like it. I’m glad to say that he was unhurt and we all ended up having a good laugh about it. He never did grow that beard back!

The Art School is a high end 50 cover fine dining restaurant. You will find it at 1 Sugnall Street,  Liverpool, near the Philharmonic. More details on the website www.theartschoolrestaurant.co.uk. It has been recently expanded to form The Art School Cellar, a wonderful cocktail bar with a great range of Champagnes. The latest venture is the Emporium of Gourmet Food & Fine Wine. Far more importantly, it achieved one of the highest scores in Tom Eats! in 2016.

Paul Askew is an author (Onwards and Upwards) and a TV regular. He has probably done more than anyone to raise culinary standards in Liverpool. His awards are too numerous to list, but he is currently joint Chair of Liverpool’s Hospitality Association and Ambassador for Attilus Caviar. He is the first UK chef to have been appointed Ambassador of Le Grand Conseil de Vin de Bordeaux and is a Fellow of the Royal Academy of Culinary Arts.  He is also a very nice man. A dinner at The Art School will be the highlight of your visit to Liverpool.

The fame of the On The Side column continues to spread. I was recently asked by Liu En-Chi, Editor of Sharing Things to contribute an article with some memories of the food scene when I was a student in Edinburgh in the 1970s, and what a food writer finds to do when restaurants are closed. Sharing Things is an online magazine produced by the University of Edinburgh. To read the article click the link.