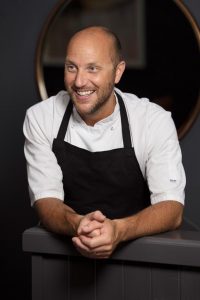 32 years. I started part time at Sealscraig, South Queensferry when I was 15. Proper good old fashioned pub grub, made on the premises.

My mum wasn’t that great in the kitchen. She jokes I took up cooking for survival. From that first job I realised I loved the kitchen environment and the discipline of it.

Scottish asparagus. We get it from Glamis. Such a short season, but one we really look forward to. That and Scottish beef. We have a brilliant supplier, Hendersons of Glenrothes. I could buy cheaper elsewhere but I’ve never been tempted. We are regularly complimented on the quality of our steaks.

It would have to be my dish of Shetland mussels with bacon, parmesan, basil and pine nuts. I took it off the menu once. We nearly had a riot on our hands.

My dog leg. (Editor’s note – no , I didn’t know what he meant either. Craig is referring to the Wusthof Cranked Turner, a posh fish slice which has no crank. See Nisbets website bit.ly/3b2ax6D.)

Marco Pierre White, one of the first rock n’ roll chefs, who made cooking sexy; Martin Wishart, with whom I’ve worked in a few places, an immensely talented man; the late Nick Ryan, of The Crinan Hotel, a real gentleman and mentor to me over the years.

Brussels sprouts. (Don’t tell my wife Vikki, as she loves them.) In France, I once ordered rognons de veau (veal kidneys) and discovered I didn’t like these either.

After a couple of glasses of wine late of an evening, I have been known to raid the cheese cupboard big style. I also have a bit of a sweet tooth, with a liking for midget gems.

–  Are you open for Sunday lunch?

Craig’s CV is like reading the Scottish edition of the Good Food Guide. He has worked for and with some of the best in the business, including Martin Wishart, Jean-Michel Gauffre, Airds Hotel, Port Appin, Hadrians, Edinburgh, The Crinan Hotel, Crinan, (first head chef job, age 23) and Restaurant Martin Wishart. He set up The Wee Restaurant in North Queensferry in 2006, and The Wee Restaurant, Edinburgh in 2016. In our interview he was too modest to mention that in 2015 he received the Scottish Chef of the Year award.

For more details about the delivery service see