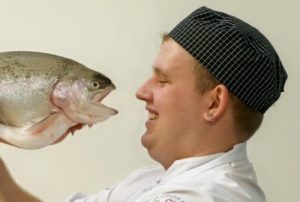 Adam is on the right

I was 14 years old when I first started in a small cafe in my home town of Arbroath. So 17 years now.

To cut a long story short I was terrible at school but I always had a good work ethic. I always wanted to work and earn my keep. I suppose I was just lucky that my girlfriend's dad at the time was a great chef (Paul Whitecross). He saw something in me and offered me the chance to train under him. So he sent me off to college where I met chef Garry Watson of Gordon’s Restaurant who was also a great mentor to me.

Ooooh, hard one ! It’s got to be white truffle oil. I love truffles but they are sooo expensive. A little splash of this magic stuff goes a long way but can really bring a dish to life and add that luxury feel. Second to that, it has to be Arbroath smokies.

Signature dish - I keep thinking to myself I’m too young to have one of these. I always think it’s great chefs of the past that have them. But I suppose I could say my dish of loch seatrout, with coastal shellfish brown butter, butternut squash purée and toasted sesame gnocchi.

Gotta be the thermomix. I’d be lost without it. It’s a good food blender that heats and cooks while it blends. It’s like having an extra chef sometimes.

Biggest fan of Rick Stein! Love him - so passionate and inspirational to a young budding chef. Who knows how many episodes of Seafood Odyssey I've watched? Other food heroes?  Deffo gotta drop Marco and Gordon in there. And Tom Kerridge. I was lucky enough to do a week's work experience with the man a few years back.  What he does and his ethos are definitely a part of what I do today.

I have a real aversion to tinned tuna. It actually freaks me out!

Nothing better than a good fish supper but it has to be done right, with proper frying, and nice chunky home made tartare sauce. I just wish chippys would try and use other fish as a special. I’m very passionate about my seafood and would like nothing better than to see deep fried ling or coley or skate. Basically some of the abundant species that our Scottish waters have to offer.

I actually love going to Arbroath and getting a tub of Arbroath smokie pate and some chippy chips to dunk with. Yum.

If I’m going out to eat, and I can’t get a table at your place, where should I go?

Well if you have a car a 30 min journey away is Gordon’s restaurant in Inverkeillor which I can highly recommend.

Too many to mention, haha!

In the kitchen one of my favourites is a chef whose spelling was so bad it used to be a challenge to figure out what your prep labels said. “Choclit warzelnut = chocolate walnut, hasselnut= hazelnut. To name a few.

In the restaurant, my restaurant manager once accidentally sat on somebody’s birthday cake. He just thought it was a cardboard box with something solid inside. That was a pickle!

Or the time another member of front of house went to sit down next to a customer he knew to have a chat. Trouble was there was no seat there and he fell flat on his ass in front of a full dining room.

While setting up The Tayberry I worked for a company on a part time basis. It had an outdoor catering gig to run a big BBQ. The team had been out the night before and wasn’t feeling too clever the next day. They all turned up - having forgotten to bring chicken, burgers, rolls and coals! That was an expensive last minute dash to get supplies. 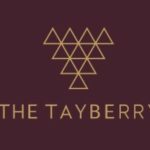 No one claimed the prize for last week's quiz concerning the origin of the phrase the real McCoy. The more prosaic claims relate to one Elijah McCoy, who invented a lubrication system for engines. I hadn't heard of this when I set the question. Anyone with any knowledge of historic London wine merchants Berry Bros & Rudd would have got the answer. During Prohibition they had a bond in the Bahamas, with an excellent customer for their Cutty Sark whisky, one Bill McCoy. Unbeknown to B,B & R, McCoy was a bootlegger. Unlike many of his trade, he didn't adulterate his wares, charged a fair price and was generous to his customers. So if someone was dubious about a bottle of Scotch he was being sold, he could be reassured that it was the real McCoy.