For reasons that will become clear next week, I acquired a sudden urge to cook the dish which we know as Char Siu. The more I considered it, the less likely the name seemed to be. Hands up anyone who has never done a bad impression of a Chinese accent. Really? I don’t know whether to applaud your purity, or to denounce you as a grade A liar. And in that bad impression, what were you mocking? The fact that most Chinese people find it nigh on impossible to pronounce the letter R.

My theory is that this dish is so named because of the fact that many English people find it nigh on impossible to pronounce a word ending in the letter A without adding an R as a suffix. Cha Siu is Cantonese for fork roast. Looking further back, to the books of Kenneth Lo, godfather of Chinese food in Britain, he gives a recipe for Cha Shao, which is apparently the Mandarin equivalent. It’s sometimes known as red pork, because a traditional ingredient in the marinade is red bean curd. It is also often barbecued in slices. If you are using belly pork that is really tricky to get right. Lo suggests pork fillet and points out, in Western kitchens using thermostatically controlled ovens it is even easier to prepare than in China itself.

I think belly pork is more traditional. I have seen recipes which call for slices to be cooked on a rack. The recipe I give today is one I adapted. The original cooking times I was given resulted in a piece of meat with a fairly charred coating. It was quite delicious but there was no sauce. Ovens vary – keep an eye on yours. 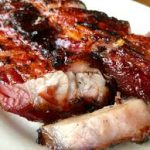 800g belly pork, rind removed (this is quite easy to do, but your butcher will do it for you).

Mix all the marinade ingredients together. Put the pork in a heavy roasting tin and cover with the marinade, rubbing it all over. Cover. In an ideal world you would leave overnight, but a couple of hours will do if you’re in a hurry. If you do chill in the fridge, remove in advance of cooking and allow it to come back to room temperature.

Preheat your oven to 140˚C/Mark 1. Cover the pork in foil. It will need cooking for 3 to 3 ½ hours, basting every hour. Make sure the sauce isn’t drying out. Add a tiny bit of water if need be. When the meat is tender, remove the foil and increase the heat to 180˚C/Mark 4. Baste again and cook for a further 15 – 20 minutes until the meat is slightly caramelised. Remove from the oven and allow to rest for 20 minutes. Removed the excess fat and put the sauce in a separate bowl or pan.

You can make pork buns or rolls, in which case heat the sauce and pour over the sliced meat. You can just serve it, as I did, with stir fried vegetables and steamed pak choi. Or you could make a world famous Vietnamese báhn mì sandwich – but that’s for next week.