I wrote last week of the incredulity of hearing of a dish entitled Cauliflower Steak. Far from being an oddity these days, it has become an important part of the vegetarian cook’s repertoire. I’ve done a bit of research and suggested a couple of ways of doing this, one oven baked, the other started in a frying pan and finished in an oven.

What is a Cauliflower Steak?

Remove the outer leaves. Cut a small section off the base so that you can stand the cauliflower upright. Make vertical cuts straight down, about 3cm apart. Cut steaks of a uniform size to ensure equal cooking times. Set aside the smaller side pieces and use them for soup, cauliflower purée, cauliflower couscous or whatever. Rereading this, I’m conscious it’s not the clearest description I’ve ever given. For a demonstration see the short YouTube video on bit.ly/2EEOiWA 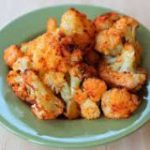 Preheat your oven to 200°C/Mark 6. Place the steaks on a greased or lined baking tray. Make a marinade with a mixture of olive oil, 2 crushed garlic cloves, 2 tablespoons harissa paste, a teaspoon of cumin seeds and a good squeeze of lemon juice. For a less hot mix, substitute one tablespoon of harissa with one of tomato purée. Or for more heat, add chilli flakes or a touch of cayenne pepper. In short, play around with this until you get something to suit; however, use dried spices, not fresh, as the latter will burn.

Brush the steaks on both sides, reserving a little of the marinade. Bake for about 30 – 35 minutes, turning half way through, until the cauliflower is tender. (The illustration shows spicy florets cooked in the same way.) 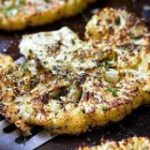 I remember Marcus Wareing demonstrating this in an episode of Masterchef: The Professionals. At the outset, he made what then seemed to me to be an odd comment, namely that this should be cooked like a normal steak.

Preheat your oven to 200°C/Mark 6. Heat an oven proof frying pan to a fairly high heat, melt a large chunk of butter and add a couple of spoons of olive oil. When the butter is hot, sear the steaks on each side for a couple of minutes per side, until golden. Add to the pan an unpeeled clove of garlic and a sprig of thyme. Spoon the butter over the steaks for a minute or two, then put the pan in the oven. This should be ready in about 8 – 10 minutes. Check that the steaks are tender. If not, baste again and cook until done.

Who in their right minds would braise cauliflower? Well, until recently I’d have posed the same question of anyone talking about cauliflower steaks and the pan frying thereof. The next recipe comes from Christopher Trotter’s Cauliflower, which I mentioned last week. 30 recipes in a great little book which, as it accurately states on the sleeve notes, “will change the way you think about cauliflower.” Thanks to Christopher for permission to reproduce this.

Christopher points out that as the florets cook in their own juices it is important that they are all more or less the same size, and that the pan is large enough to contain them all in one layer.

Soak the saffron and raisins together with just enough boiling water to cover the raisins. (In the recipe, Mr T doesn’t specify for how long, but he tells me five minute should suffice.) Heat the oil in a large sauté pan (see above) and add the cauliflower and almonds. Cook, stirring gently, until browned, then add the garlic and cook for a few minutes more. Pour in the strained saffron water, add the paprika, cover and simmer gently for 10 minutes or so until the cauliflower is just cooked. In the meantime, separate the raisins and saffron, discarding the latter. When the cauliflower is cooked, finish with the raisins, parsley and vinegar, and season with salt and pepper.

Christopher Trotter is Fife’s Food Ambassador. In addition to his writing and media work he runs cooking classes and workshops of all sizes and to all specifications.

His latest work, Broccoli, will be published in October.

To acquire this or any of Christopher’s other veg books contact him online at  ct@christophertrotter.co.uk or by phone at 07739 049 639