Not so very long ago, some vegetarian friends (yes, I do have a few, albeit no vegans) were known to complain loudly that the token veggie offering on a menu, (assuming the establishment stretched to more than just an omelette or pizza) was likely to be mushroom based. Not so very long ago, most of us were likely to think of cauliflower as a dreary thing, served in a puddle of cheese with water leaking profusely around the edge. I recently watched an old episode of a Gordon Ramsay Kitchen Nightmares programme in which he sneered at a dish listed as Cauliflower Steak. Now you can find online a recipe entitled Gordon Ramsay’s Famous Vegetarian Cauliflower Steak. Time does indeed move on.

For once I welcome this change in food fashions. Escoffier’s Ma Cuisine devotes barely two pages to cauliflower: Larousse Gastronomique less than half of one. My friend Christopher Trotter, on the other hand, has written a whole book on this much underrated veg. We’ll have more from that in due course. Today, in the first of a series of three, let’s begin at the beginning.

How To Cook Cauliflower

My plea would be to cook it in any way OTHER than the way our mothers did it. In other words, don’t boil it. Unless you are prepared to leave it to dry for a very long time, before doing something else with it, you simply will not get rid of the excess liquid. That explains the horrid wishy washy puddled cauli which we all hate. Instead, steam it. This takes less time and leaves it dry. You can also braise, roast, pan fry, deep fry, stew, or make into soups, and have it as the star of any number of curries and vegetarian main dishes. The list is almost endless. But first some thoughts on the basics. (Do remember that this column is aimed at beginners as well as star cooks such as your good self.) 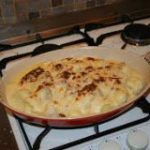 Cauliflower cheese is the one we all know. You cook the cauli, (steamed, not boiled as you now know), cover it with cheese sauce, top with breadcrumbs and brown in the oven or under the grill. With a good sauce, this is a very fine thing. One or two pointers. Make your sauce a little thicker than normal. Mix up the cheeses – try adding some parmesan or blue cheese in addition to, or in place of, the normal cheddar. Escoffier’s basic recipe uses a plain bechamel sauce with the cheese added only as a topping along with the breadcrumbs. Not sure I fancy that, but try adding a topping of a different cheese for some contrast. He was also, I suspect, quite cavalier in attributing recipes to different parts of the world. Thus his Chou-fleur (sic) Milanaise recipe involved putting cheese in a buttered oven dish, then cauliflower, then more cheese, leave in a warmed place and just before serving pour a little browned butter over the cauliflower. No thanks.

I did, however, find an intriguing Italian recipe with cheese –

Cook the cauliflower florets and place in a warm serving dish. While the cauliflower is cooking, make a  white sauce with 25g each of flour and butter and 100ml of milk. In a food processor or with a hand blender, blitz the sauce together with 250g of strong Gorgonzola, (ie not the dolce) and 2 tbsp of brandy. Season with salt and pepper. Spoon the mixture over the cauliflower, sprinkle with cumin seeds and serve immediately.

Finally for this week, a favourite from my what to do with leftovers repertoire. You can adapt this soup to use many, but not all, things which are left on a cheese board the following day. But remember the rule, analogous to cooking with wine, if you wouldn’t eat it, don’t cook with it. The current Mrs Johnston once made various concoctions to dispose of a Christmas Stilton which was well past its best; Each experiment, sadly, was more disastrous than the one before.

Sweat the onion in the oil until nearly soft then add the potato and fry gently for a few minutes. Add the cauliflower, stir all the ingredients well, season with a little s & p and cook for a further few minutes.  Pour in the stock and simmer until all the veg are soft. Reduce the heat and add the crumbled cheese. Stir until the cheese melts. Allow to cool then liquidise (a stick blender is easiest). Taste and adjust the seasoning. Add more cheese if desired, over a gentle heat to allow it to melt. This would also work with broccoli.