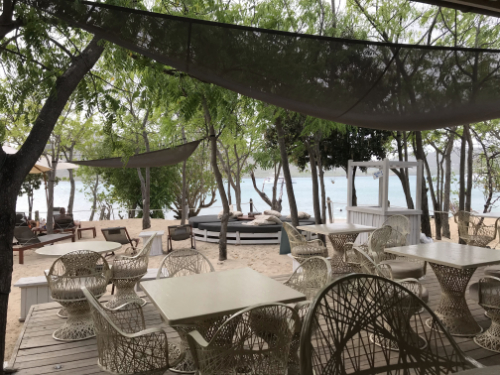 (For the price conversion, see below. 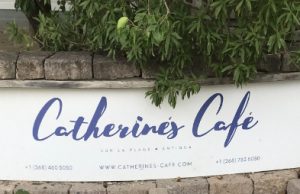 It's our last day here in Paradise. The food has been fine, but not startling: time to go out with a bang. I'd read about Catherine's Café. We've passed it a few times by land and sea, via our walks and canoe trips. French apparently, but outwith the budgets of our friendly local contacts, so no first hand recommendations.

Well say no more. French and Caribbean. What a combination - zut alors, ooh la la, aw hee haw hee haw! Bibbed, tuckered, aperitived, we struggle over the steep hill and slide down to the far end of Pigeon Beach. It looks nice. As you would expect from a place on the coast, they also cater for groups of people in cozzies just looking for a drink. Fine on a quiet day, but the combination of a raucous crew out front and expensive fine dining could be an unfortunate one. But all good today. We're shown to an elegant table, outside but in the shade. Then it all starts to go down hill. We meet Flora (names changed to protect the guilty) with the dead eyes. She brings us some OK bread. Sparkling water is served tepid with no offer of ice until we ask. Not the worst crime, but read on.

The menu is a pretentious affair, primarily in English with French headings, but with a little French and a smattering of Spanish for good measure. I suppose I don't mind seeing entrées, salades, plats, viande, poisson frais, etc. What irritates is the central box headed Luxe. Fair enough perhaps for a platter of fruits de mer or Siberian Royal Caviar (forgot there was a King of Siberia) but to include baked local clams, cold poached gambas or anchovies?

Anyway, L, who takes these funny turns occasionally, orders the Salade Superaliment - kale, quinoa, you know the sort of thing. I like the look of the White Anchovies Crostini with Red Lentil Hummus, though I'm less keen on the $65 price tag.  At this point I should explain the pricing. All dishes are marked in Eastern Caribbean (EC) dollars.  $1 EC = $0.40 US. $1 US = £0.80 (approximately). Normal people would have worked out a conversion rate from EC dollars to pounds sterling. For reasons best known to ourselves, we converted to US dollars then to GBP, using these rough and ready calculations. This makes it about 21 quid for crostini. Suspend disbelief, Tom - it's the last supper.

Choosing mains was even harder. You could have catch of the day served as soupe au pistou or as warm escabèche. I had forgotten what escabèche is; however, at least I had once known, unlike Flora. Now it's hardly the first time that a youngish waiter hasn't known all about the menu. That happens, though the more expensive the place, the less acceptable it is. But when in response to the question our Flora just stood, smiled and nodded. My by now ingrained Antiguan laidbackness began to crumble. Pressed to go and find out, she returned triumphantly to say that it was with a sauce. And the catch of the day? Well, this time she toddled back to the kitchen to ask, with no prompting.

L eyed the Crevette section and fancied going simple, with garlic butter and chips. You had to select how many crustacea you wanted. Confusingly, they had undergone a name and language change. The choice was between 3 gambas at $95 or 5 at $135, proving that it pays to buy in bulk. What sort of size are they? Oh, why did we bother asking?

If any of the other staff had been paying the slightest bit of attention, it should have been as crystal clear as the sea (which on day one I was devastated to learn was actually the Atlantic, not the Caribbean) that a feckless waitress was irritating the hell out of two diners. But if anyone saw, no one cared. Nothing more dispiriting than so many pairs of eyes that would not see, almost as many as on the fish counter.

Well, having got that out of the way, you're going to expect me to start telling you about the meal. Well, not quite. Our Flora came back, wearing the most cheerful expression we'd seen, to say that, yes, there were no anchovies. I'm ashamed to say I was getting quite cross, especially as I had to ask her to return the menu, not having committed it to memory. The BBQ Local Octopus with Ratatouille, Israeli Couscous, Black Olive and Anchovy Dressing sounded good.

Starters arrived promptly, and were perfectly fine. The salad had a zing of lime, though L got a little fed up by the end of it. When will that girl ever learn? My octopus dish comprised a number of whole baby squid with couscous and a blitzed sauce probably containing all the other advertised ingredients. Not bad at all.

The escabèche was a generous chunk of nicely cooked fish (mahi mahi, I think). The required acidity came from the gentle pickling of some of the veg, probably the fennel. A very good combo, which I would order again. Nice prawns/crevettes/gambas though the chips were floppy and salty (were these two of the seven dwarves?) and I suspect Unilever plc may have assisted in the manufacture of the house mayonnaise.

Did we want a dessert? Well, let's look at the menu. When Flora chucked one menu between the two of us at an angle which neither of us could read, we'd had enough. After 55 dispiriting minutes we called for the bill. Every other establishment we had visited could take card payments without drama: here, for some reason, they needed to convert EC dollars to US. An interminable delay while they look for a calculator. I helpfully do the sums on my phone. The manageress got involved (at last), and mentioned in passing that they did indeed have my anchovies in stock. I was past caring. For some reason she insisted on removing the octopus from the bill.

We gently suggest that Flora could do with a little training. As we leave, we ask if Catherine the owner visits regularly. No, comes the reply, she's in Africa. When we get back to English Harbour, we're just in time to catch the end of happy hour. Not an entirely wasted evening.