I can’t remember how the idea of an article on breadcrumbs came to mind. In the interim, I glanced at a pub lunch menu, which proudly offered diners the choice of having their fish either battered or breaded. What a nation of sophisticates we have become. So, taking things in that order, let’s start with batter. What is it?

Larousse Gastronomique defines batter as a liquid, varying in thickness from a thin pouring consistency to an elastic mixture which is too soft to hold its shape but not thin enough to pour easily and evenly. We tend to think of this as being made with varying degrees of flour, eggs, and milk or water. It may or may not contain a leavening agent. We will often think of flour based pancakes (both crepes and our Scottish pancakes, or drop scones as the rest of the world knows them), whereas further east ground rice or pulses will be involved. The most common breakfast in the Indian subcontinent is the dosa, a large thin pancake of rice-, chickpea- or lentil flour, often filled with spiced potatoes or vegetables. If you are a fan of the traditional roast dinner you will engage with batter in the form of the traditional Yorkshire pudding (see below).

But far and away the most common use of batter in cooking in Britain today is in the nation’s chip shops, where almost everything is battered, from good fish at unbelievable value to the culinary horror that is the deep fried Mars Bar. Not one of our nation’s prouder inventions. Here is a classic batter recipe as used throughout the land. It’s for your information only. You thought your lovely fish went a deep golden colour through the skill of the fryer, didn’t you?

Mix all the ingredients well in an industrial mixer. Leave for half an hour. Use within four hours. If you don’t, the glutens in the flour will start to react, and you will end up with battered food which seems to be wearing an army greatcoat. (That could explain some of the truly awful fish suppers I’ve eaten.)

As you can see, this is a very rudimentary batter, and there are many variations on a theme; however, if I were planning to coat food in batter before cooking, I would almost certainly look east. 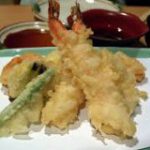 Many people, coming to Japanese cuisine for the first time and fearful of a diet consisting, as they believe, of nothing but raw fish, are often pleasantly surprised to discover that the Japanese do a lot of deep frying, using this delicate batter. For best results, you must use fizzy water and it must be ice cold. You can tempura fry almost anything; however, you fry only until the batter is golden brown. It’s ideal for thinly cut vegetables, prawns or oysters. If you want to tempura thicker vegetables, you may have to par cook them first. Make sure the food is dry, and lightly coated in cornflour before dipping it in the batter. Ensure your oil is sufficiently hot (about 180°C) and don’t overfill the pan with food. Allow the temperature of the oil to come back up between batches.

Mix together the flour, sugar and salt and gradually whisk in the water. We’re taught to hate lumps – not so here. Tempura batter will always be slightly lumpy. Do not over whisk.

But we have to leave Britain’s favourite batter pudding to the end. I canvased readers for favourite recipes, and surprisingly there was near unanimity, with most suggesting the 1:1:1 version. Where would roast beef be without- 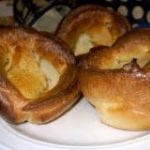 The 1:1:1 refers to using exactly the same measure (note, I say measure, ie the receptacle, NOT measurement as in weight) for your eggs, milk and flour. I’ll leave the instructions to Robert Corrigan of Mr C’s Pies, chef and piemaker extraordinaire. Follow him on Twitter at @Mrcspies. Thanks, Robert.

Robert doesn’t mention it but I would suggest that you take the mixture out of the fridge about 30 minutes before cooking to bring it back to room temperature. Note his reference to smoking hot. This is an overused phrase in recipes. For example, I have seen instructions to brown meat for casseroles in “smoking hot” oil. Rubbish – you just end up burning later batches. But here, when Robert says smoking hot, he means it literally.

When I made them commercially, I used a ½ pint mug. One mug of plain flour. The same mug of eggs, salt to taste then the same mug of milk. Mixed together. Rested for a few hours in the fridge. Preheat oven to 220°C. Tins in the oven with beef dripping (oil if no dripping). When smoking hot, pour, using a jug, filling three quarters way up the tin. Do not open the oven for 30 minutes. I then turned them over for another 5 minutes or so to ensure the bases were cooked. They never ever failed.

* Since I wrote this, I have read a survey suggesting that Yorkshire pudding is the most universally popular food in the UK.  I’m going to throw in my heretical opinion here at the end, in the hope that no one reads it. If we’re sharing a roast beef dinner, I’ll happily give you my Yorkie in exchange for your roast tatties. Sssshhh….