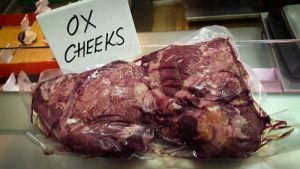 This is such a simple recipe that I thought hard about including it at all. But when you have a meat dish which can feed up to six people with the main ingredient costing less than a pound a head, it is irresistible. Equally so is the transformation from something so tough that even your best knife needs a bit of elbow to cut it into an end product of melting loveliness.

I do have to say that in my recipe the gravy ingredients were more expensive than the meat. You could, I suppose, use stock only, or  water alone, but it wouldn't be so good. And even if you're on a tight budget, don't be tempted to use wine which you wouldn't be prepared to drink. A thin and nasty ingredient will produce a thin and nasty stew, and serve you right too. 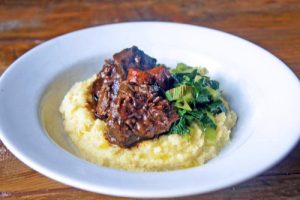 In fact the only thing out of the ordinary about this recipe is the hardly-revolutionary use of a cartouche. Don't know what a cartouche is? Well, no point consulting Larousse Gastronomique - it won't tell you either. It is simply a circle of greaseproof paper placed on top of the braise. Why? Sheer laziness, is the answer. You will be cooking this for at least four hours in the oven. Some of the liquid will evaporate, thus leaving the top parts of the meat exposed with the potential to dry out. You could of course stir it at regular intervals, but by employing said cartouche you can go away and leave your pan in peace. To make it, draw a circle around the pan lid on a sheet of greaseproof paper. Fold it in four and cut just inside the pen or pencil line. Now I was rubbish at handwork at primary school, but even I can achieve an approximation of a circle. (It is said that Leonardo da Vinci could draw a perfect circle freehand, but that doesn't help us in 2021, since he died 502 years ago.)

You will need a heavy oven proof pan with a tight fitting lid. The paper goes on just before you transfer the pan to the oven. Makes sure it's pressed down well on the surface.

Preheat the oven to 140˚C/Mark 1. Dust the ox cheeks in the seasoned flour, shaking off any excess. In a fairly hot pan, brown the meat all over, then remove. In the same pan, brown the onions and carrots. (All this browning used to alarm me, till I adopted Gordon Ramsay's mantra that colour is flavour. But equally don't follow some books which say that your oil should be smoking hot. You'll just end up with black bits and have to wash the pan out, whereas the whole idea is to retain all of the flavours.)

Once the veg are nice and brown, return the meat to the pan, pour in the wine, bring to the boil and allow to bubble for a couple of minutes. Add the stock and the herbs with a little more s & p and bring to the boil again. Remove from the heat, place the cartouche over the surface, fit the lid on tightly and transfer to the oven.

The stew is ready when the meat is falling apart tender. This will take about 4 hours, though it could be longer depending on the size of your cheek chunks. Check the seasoning. Using the flour crust method will have given your gravy some thickening. If you prefer it thicker, remove the meat and boil the sauce rapidly to reduce. Keep a close eye to make sure it doesn't start to stick to the pan.

Simple but delicious - and very economical. Great with mashed potato. Try horseradish mash for more flavour, and whatever veg you fancy.