So you want to cook bouillabaisse? Well, you can’t. Says who? Says The Marseillle Bouillabaisse Charter, issued in 1980 by a group of restaurateurs in the city. The stated objective is to specify the elements of a good quality Bouillabaisse, with the goal to make this local dish better known among customers, while at the same time respecting the art of the professional. It sets out some mandatory ingredients, the required accompaniment, rouille, and also stipulates that the fish must be cut up in front of the guests.

Now before we accuse the French of getting too uppity, the charter does concede that this started life as a humble fisherman’s dish, one which has been refined and improved over the years. Fish soup, after all, is hardly unique to France. It was probably known to the Phoeceans (no, not the Phoenicians, smart alecs), an ancient Greek people who founded Marseille around 600 BC. The Spaniards have had sopa de pescados for ever. Even the rather chauvinist Larousse Gastronomique concedes that brodetto, the Italian equivalent, almost certainly predates today’s dish.

How do fishermen make their living? No, not by catching fish, but by selling them. And that which they couldn’t sell, such as scorpion fish (rascasse) and conger, became staples of their own diet. Originally these would have been very simply prepared, cleaned and cooked whole in a soup of veg, the bones and heads creating the stock. The Mediterranean version, flavoured with fennel, thyme and bay, began to acquire its own identity. The addition of rouille, a wonderful garlicky mayonnaise served  on slices of stale bread elevated it. Some types of sea food are listed in the Charter as being acceptable: more sophisticated versions began to use lobster.  One reads of sea urchins being added to the platter in the 1930s.

So that which was once a rustic stew has moved on. By making the fish stock in advance, the bisque becomes worth eating as a course in its own right. It is optional whether you serve the soup and rouille first, followed by the fish (possibly with extra potatoes cooked in the stock), or have it all as one plate. You can keep your soup chunky, or blend it. Even the Marsellaises concede you an element of choice. As we can’t readily get scorpion fish or white scorpion fish, or cigale de mer or spiny lobster, we ain’t going to be authentic. And as we Brits aren’t terribly keen on coping with chunks of whole fish, I’m committing the heresy (as suggested by Rick Stein) of using fillets. Use the heads (minus gills and eyes) and bones to make your stock in advance. With the addition of lobster, I’m going for the luxury end. Let’s face it, no fish is cheap these days. An everyday peasant dish this is not. Better rarely but well is often my food motto. This is a pick and mix from various recipes.  Here goes. 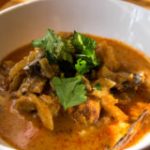 A Good Fish Soup (with a nod to Bouillabaisse)

If you’re being really authentic, fillet your fish and cut into the appropriate sizes. Alternatively, ask your fishmonger to do that and get him to give you the bones to make the stock. If you’re being really lazy, buy good quality fish stock. A cube will NOT do for this. Cook your lobsters (boil in heavily salted water for 15 minutes. Please kill the beasts first by plunging a sharp knife into the brain in the slit between their eyes). Shell and reserve the meat, keeping the shells (including heads, legs etc) for your stock.

Make the stock. While this is on the go, cook the veg gently in the olive oil with the garlic. Don’t allow them to colour. Season with pepper and the chilli or cayenne, but avoid salt at this stage. Add the tomatoes, bouquet garni, fish stock, saffron, orange peel and potato. Simmer gently for 20 – 30 minutes, fish out the potato after 20 minutes or so when it is on the point of collapse.

To make the croutons, rub the slices of bread with cut garlic, drizzle with olive oil and bake in an oven at around 200°C for about 15 minutes until crisp. This is a good use for stale bread, which will need less time. These can be made in advance.

To make the rouille, put the garlic, saffron, lemon juice and cooked potato in a food processor with a pinch of salt. Blitz together with the egg yolk, then gradually add the oil until you have a mayonnaise like consistency. Season to taste.

Back to the soup. Remove the bouquet garni and orange peel and blitz with a hand blender. If you want to be very swish you could sieve it, but I wouldn’t. Check the seasoning. Bring it to a simmer then start to poach the fish. You need to add the densest fish first. The monkfish will take longer than the others. Make sure you don’t overcook – in fact, as you’ll need to keep the fish warm for a little while, slightly undercooked is best. When the fish is ready, remove and keep warm. Add the mussels and lobster pieces. When the mussels are cooked (they take just a couple of minutes) you’re ready to serve. Give everyone an equitable amount of fish and shellfish and ladle over the soup. Serve with the croutons, rouille and cheese. Garnish with the fennel fronds or parsley. A squeeze of lemon won’t go amiss either. And please don’t email to say that the photo doesn’t have fennel on it. I don’t photograph my own food. That’s not as easy as you might think – I stick to cooking the stuff.

My preference is to serve this as one course, but as mentioned above you could serve as two.