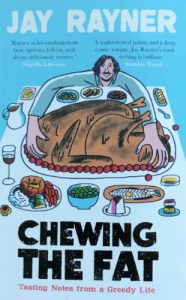 Chewing The Fat: Tasting Notes From A Greedy Life

I have long believed that Jay and I may well be twins separated at birth. Never mind the significant height differences (you saw that film with Danny DeVito and Arnold Schwarzenegger, didn't you?) Compare our views on matters culinary. Over the years the similarities have been legion, and there are many more to be found in this volume. It's a selection from his Happy Eater column in the Observer Food Magazine.

Let me give you a few examples. We share a hatred of waiters who don't write down the order. It's just like watching a time bomb, mistakes waiting to happen, to no good effect. While Jay and I, cooks both, know that good food can be fast, in his article Slow Down he rails against food which is described as express, quick or easy. And I absolutely empathise with his concerns prior to arriving at a holiday home and the stomach churning fear of the ill-equipped kitchen. (I am still recovering from a week in a house in The Wirral, whose kitchen boasted everything one could need, including decent knives and a knife sharpener.) Recovering, that is, from the shock of the unexpected. That really doesn't happen often.

Anyway, as I am significantly the elder of the two, this means that Mr Rayner has been much influenced by me. Imitation is the sincerest form and all that. (Er, hang on, I think I've discovered a flaw in my original hypothesis.) But no matter, as Chewing The Fat also discloses significant differences. Unlike Jay, I love picnics and am partial to decent gin, though I do get his point about the hipster absurdities of the latter.

I have discovered that in writing about food it can be more entertaining (and sometimes easier) to be negative. When someone can celebrate food as joyously as Jay can (see for example the third chapter, Oink, a celebration of the pig in all its forms) he is entitled to take a swipe where he pleases. While we share a dislike of breakfast in bed with the inevitable crumbs until the sheets are changed, I would have lacked the word power, or indeed the nerve, to describe the trauma of sweaty crevices and butter smeared pillows, and not in a good way. This, incidentally, is in a chapter entitled Bloody Luxury.

Luxury is, of course, expensive. This volume, on the other hand, is, depending on your choice of hostelry, the price of a not very large drink. It's also much more fun. After all, what is the point of one drink? And Christmas is coming. A perfect stocking filler - and no doubt we will soon have the extra delight of Jay and his one man show to repeat the pleasure.