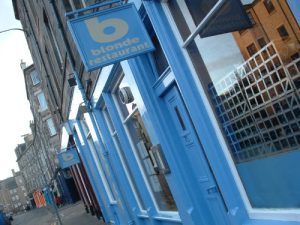 Sod's Law, isn't it? In normal times, I have two or three reviews in the can. Next week I anticipate about three outings to be written up. On Thursday, a lunch with the Edinburgh Expert was in the diary. Plenty of time for a Friday publication. So what happened? Lurgi, that's what. No, not Lurgi 19, just a particularly nasty flu which has left me feeling beaten up and blah. Lunch cancelled.

So I am grateful for the offer made by L to tell me all about yesterday's lunch with the Very Rev.

We should preface today's review by pointing out that this exercise is a sign of the times. 20 years ago a lunch featuring L and VR would have been a three bottle affair rendering sensible narration quite impossible. I was impressed immediately, as a few photos were sent before the proceedings even started. Not great photos, to be fair - just the sort of thing you're used to from me. (Though the one at a jaunty angle comes from their own collection, so don't blame L or me.)

There has been a restaurant on this site for a long time now. Interestingly, I couldn't find much by way of reviews, but Blonde itself seems to have been set up at the turn of the century. By Edinburgh restaurant standards, that's a long time to stay the course. 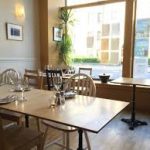 L was surprised by the size of the place. Two reasonable sized rooms at the front, and more tables tucked away in the back. She was also very impressed by boss woman Imelda (McCafferty). Dealing with a couple of boisterous men, she was happy to boister back: dealing with L and VR, she treated them with the quiet deference befitting their extreme old age.

Pay attention to the food, I entreated. The first outline narrative went well, though the photo of the menu was illegible. (Don't worry - I've done that on numerous occasions.) Sadly, attempts at embellishment went a little awry. So far as possible, I am quoting from contemporaneous notes and emails.

Starters included a salad of fig, sun blush tomato, red onion and blue cheese. The dressing was toasted sesame and balsamic. All good, apart from the harshness of the unmarinated onions. The Holy Man had a starter of mussels with coconut milk, lime and basil. A medium size, plump, decent portion I was told. When I asked for more detail, I was told that the muscle (sic) sauce was a puddle of lime and coconut luscious sauce.  (Don't you just hate predictive text?) And in summary? Very nice. Hmm.

Mains were described slightly more eloquently, a nicely crispy confit of duck, not at all pink. (That's because confit duck leg is cooked right through. - just saying.) Special praise was reserved for the quinoa and lentil shepherd's pie with cheddar mash and parsnip crisps. The seasoning, involving garlic, cumin, fennel and something else, was commented on. L particularly appreciated the fact that this didn't look as though it was trying to look like a meat dish.

Puddings sound intriguing. Red wine poached pear is nothing new, but the accompanying strawberry and black pepper sorbet, blueberries and a sharp blackcurrant purée sound as good as they apparently tasted. It was described as very nice, and pretty as a picture. (You're noting a theme here with the adjectives, aren't you?) A similar description was given to a generous slice of banana and blueberry cake, with coconut ice cream. Yes, very nice.

When I looked at the menu online I wasn't blown away. I have no problem at all with relatively simple food done well, though this seems to feature quite a lot of non seasonal ingredients. What did strike me were the astonishingly low prices. Blonde Restaurant has now been added to my must-visit list, the eloquent recommendation ringing in my ears.

Who said this restaurant reviewing gig was easy?