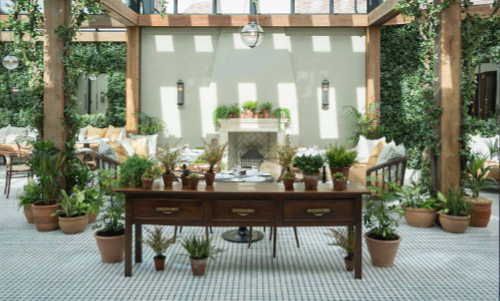 Gleneagles Hotel sits amidst the lush greenery of Perthshire.  A destination hotel where every conceivable sport can be enjoyed.  The hotel was the brainchild of the Caledonian Railway which had opened the nearby eponymous station, which would serve as a point of arrival and departure for well heeled Edwardian guests. The hotel opened its doors in 1924.  It is now owned and operated by Ennismore, which also trades the Hoxton hotel group.  The group will soon open the private members' club to be known as The Townhouse on St Andrew Square in Edinburgh.  Annual fees are £2200.

The Birnam Brasserie is the most relaxed and informal of the three restaurants within the hotel itself.  A couple of days before Christmas it offered a bright, bustling, yet calming space for a family meal.  There were groups of all generations, young and old convivially celebrating the festive season. Couples a plenty. The atmosphere was one of quiet enjoyment, forget the stress, relax, enjoy and allow us to pamper you.  And they did it in spades.

The brasserie is overseen by manager Simon Fache, who has an enormous wealth of experience from running silver service at the Royal Enclosure at Ascot, to latterly being restaurant manager at the The Churchill restaurant at the Hyatt Regency in London preceded by five years at the Berkeley in London. Sicilian Stefano Furci is head chef, bringing a light Mediterranean touch to the menu from the open kitchen.

Finally, flawless and efficient service were provided by Martin McRae, who began at the brasserie three years ago. He has since represented the hotel in several competitions for those working in the hospitality trade.

The menu is just what one would anticipate in a brasserie setting.  Starters include bruschetta, terrine, fish and parfait. There is a selection of mains including steaks from the grill, fish, salad and pasta.  Desserts abounded.

The table was served a generous basket of fresh focaccia together with a fruity olive oil and sweet vinegar. The fritto misto was a generous portion and a thing of joy: trout, salmon, hake, squid and anchovies all in the lightest of tempura with a side of aioli and lemon concasse. The ham hock was, again, a good portion of terrine with a buckwheat tuile atop and accompanied by a delicious and deeply flavoured red onion and prune chutney.

Mains saw us select steak and salmon.  The salmon was delightfully pink and moist with a lemon and coriander flake. Served alongside was a burnt  lemon butter together with salad and skinny fries.  The steaks (hangar and sirloin) were beautifully cooked.  They cut like butter, utterly delicious with a nice touch of charring on the outside and beautifully pink on the inside.  There was no indication of their source but one imagines they were local.  A choice of sauce was included together with skinny fries. Steak frites perhaps, but of the highest quality and demonstrative of a sure and confident hand in the cooking.  Sides (£5 extra) of wilted spinach, pancetta, green beans, with crispy potato skin and charred broccoli, chilli and garlic hit the spot.  One could have gotten away without them but they brought an added element to the meal: again deft, light handed cooking with just the right balance of flavour allowing the freshness of the vegetables to shine and be enhanced.

Dessert was the lightest tiramisu.  Oft considered but eaten only once this year, this offering excelled. The balance of coffee to ricotta with the lightest of cake made for a thing of beauty.  The apple pie was presented as a light, crisp pastry enveloping apple, the sharpness offset by a light caramel sauce.

The ‘by the glass’ wine list of five red, five white, one rosé and four fizz was just right. The Aliança, Foral dos Quatro Ventos, Douro, Douro Valley (£9 for 175ml) was a powerful, damson red which paired superbly.  A couple of years back, it was awarded 93/100 by Decanter magazine.  Quality.

The editor of these pages once told me the cost of the food on the plate was 20% of the price*. The prices here reflect the quality of the ingredients and the cooking.  But atmosphere and service are integral parts of the reason a nice meal transcends to a memorable meal.  This was, without doubt, the most memorable meal of 2021.

* Not quite what I said. To get the cost net of VAT, you have to deduct one sixth. The conventional wisdom was that the food cost should be one third of that net figure; however, one chef operating at the top end of the market told me that he aimed for a figure of one fifth.