Many thanks to the very lovely Beth Stone, our guest cook, for this very quick ceviche recipe. As you will see from the photo, the finished dish is as elegant as the author herself. Many of you will know that ceviche is a technique for “cooking” fish by marinading in citrus juice. Needless to say, there is a dispute as to its origins. While it has almost become the national dish of Peru, some sources claim that it was taken there by Moorish women from Granada who went over with later generations of conquistadors.  I suppose you can just take your main ingredient and choose heads or tails.

One word of warning. Because no heat is involved, there is nothing to kill off any bacteria. It is therefore vital to use the freshest fish possible. For stone bass, you can substitute sea bass or indeed any of the other fish you might use for a ceviche. Generally speaking you need a semi firm white sea fish. You could use sole or flounder. Blood oranges can still be found, but we are coming to the end of the season: if you can’t find them, ordinary oranges will suffice. Verjus, let’s be frank, is a cheffy ingredient – Beth picked this recipe up at a cookery course down south. It’s a very acidic juice made from unripe grapes. On the assumption that you don’t have any, just add extra lemon and lime juice in equal measures. The five minute marinade will be a very light “cook” and assumes you have diced the fish quite finely. You may want a little longer – I was always told that you need a minimum of ten. Taste a little after five minutes and adjust the time to suit yourself to get it as you wish it. Segmenting your orange is fiddly, but it is essential. If you haven’t done it before watch the video on https://bit.ly/2SSE1zh. It’s a skill worth acquiring. For the radish, the pros would use a mandoline, but I couldn’t be a***d getting mine out, assembling it, making the trip to A & E after I’ve sliced my hand, then washing it and putting it away just for one measly radish. A sharp knife does it for me. 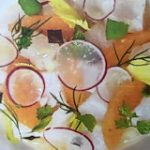 The photo shows how a professional (and Mrs Stone) would present the dish, with micro herbs in evidence. The rest of us can do our best; however, note the use of celery leaves, which you can see in the photo, but which the original recipe fails to mention. These are a much neglected part of the plant – don’t throw them away.

Ingredients (for a single portion)

1 small radish, topped and tailed and sliced horizontally as thinly as possible; about 20g of herbs, ideally including dill, and chervil or tarragon, and a few celery leaves.

Remove any fat and bloodline (any dark red strip on the fillet) from the fish and cut into dice. Mix the marinade ingredients together. Season the fish with salt and white pepper – you don’t want it to seem that small flies have landed on it – then pour the marinade over, mix well then leave. After five to ten minutes mix in the celery. Leave for a minute or two more, then drain off the marinading liquid. Arrange on a serving plate and garnish. Serve without delay.