Foodie fashionistas in London are always on the lookout for The Next New Thing.  Quite a difficult thing to do these days, and therefore readily open to parody, not to say ridicule. One of the first ever On The Side columns looked at a ludicrous list which appeared on the Observer Food Monthly (editor Nigel Slater, who should know better) entitled Everything We Love In The World of Food Right Now. Read about it and wince. If new trends are hard to identify, new cuisines are almost impossible. This probably explains the rise to fame of Amy and Emily Chung, two Burmese doctors, who write and cook under the name, The Rangoon Sisters.

For some years they have been running supper clubs. They came to prominence last year when they published their cookery book entitled, yes you guessed it, The Rangoon Sisters, subtitled Recipes from our Burmese Family Kitchen. Burma changed its name in 1989 and is now officially Republic of the Union of Myanmar. (We'll call it Myanmar for short.) The city formerly known as Rangoon is now called Yangon. I had mistakenly believed it to be the capital. That was the case until 2006, when the capital was moved to Nay Pyi Taw, a slightly eerie place, some four times the area of London, with about one tenth of its population. (The things this column unearths for you.) 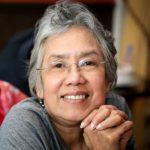 Anyway, Tom Cooks! has no need of the Chung book, as we have our own expert, in the form of my good friend Daw Myint Su. A native of Myanmar, Myint Su, along with her husband Clive Criper, runs the Mingalar Trust. Its principal activity is the Myanmar Extensive Reading Programme (MERP) to increase exposure to, and understanding of, English in Myanmar through reading. Clive and Myint Su have spent much of the past six years in Myanmar. Things are uncertain just now. There are concerns that the new regime may not be so sympathetic to non governmental organisations. More about Mingalar in next week's edition.

Myint Su is  very talented in the kitchen and I've been fortunate enough to eat her food on a few occasions. It is very different; however, I always say that good food is good food, wherever you find it and hers is delicious. She was persuaded to part with a couple of recipes. On my travels (I nearly typed these days) in less troubled times I have become increasingly fascinated by the similarities and subtle variations in the different cuisines of south east Asia. I am struck by the resemblance between today's hsi-pyan and the Malaysian classic beef rendang. Both dishes are counter intuitive to us in the west, as their aim is to end up with a sauce which, in practice, has split. Note that the recipe involves a marinade for a minimum of 3 - 4 hours. 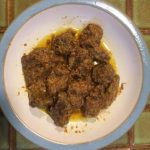 Myint Su explains, Hsi-pyan literally means ‘oil-returned’. The idea is to cook until all moisture is driven out and the beef appears coated in oil and caramelised onion. It is a dryish curry and eaten with rice flavoured with the oil and onion essence from the curry. Depending on the quality of the meat, no liquid needs to be added and the moisture from the beef itself should cook it until it is tender, hence the gentle simmering. If the beef is still tough when the oil has separated, add a little water and simmer on.

Combine the beef with the garlic, ginger, turmeric, chilli, salt and pepper. Work it in thoroughly and let it marinade 3 to 4 hours or overnight in the fridge. Heat the oil in a heavy-bottomed saucepan and fry the onions till the onions are golden brown.

Add the marinaded beef and mix well. Increase the heat to ensure the mixture is cooking, then reduce heat and simmer very gently till the meat is tender and the oil has begun to separate.

Myint Su points out that this is quite a dry dish; however, any south east Asian meal will comprise a variety of plates including vegetables, pickles etc. (I've just thought of what I want to do post lockdown.)