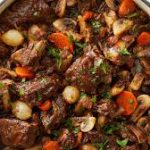 On Wednesday we talked about cooking with wine, so there was only one candidate for today's Tom Cooks! Actually, there were two. It was a toss up between today's dish and coq au vin. Done correctly, both are very similar. And what else they have in common is that both can be done very simply and basically. Throw beef, onions, mushrooms and carrots in a pan with wine and some seasoning and, after a few hours, (the cooking time depending on the quality of your beef) you will have a perfectly fine stew. Well, if your standards are so low, fair enough; but if you want something to transcend the day to day banalities, take time to assemble this masterpiece. It's a bit fiddly, but it really is worth the effort.

This recipe is based on the one featured in Mastering the Art of French Cooking. That is one of the few cookery books from which I've ever followed recipes to the letter. Like classical French cuisine itself, it now seems a little old school, but this is pretty close to the original. I've avoided the flambéed brandy (or was that in the coq au vin recipe?); I've taken out the joint of streaky bacon because it's hard to find, and my brown braised onions are not the little pickling ones (not always in season and a b*****d to peel). But I think the blessed Julia (Child) would approve of the final result.

What makes this stew different is that it is made as three separate components which are combined at the end, namely the stew, the sautéed mushrooms and the brown braised onions. A couple of points about the beef. Ideally buy it in thick slices and cube it yourself. Most ready cut beef is too small. You want pieces at least 3 - 4cm in size. For best results, don't use the cheapest option. I use what we Scots call round steak - can anyone tell me what the rest of the world calls it? Julia Child recommends rump steak. You will note the flour, and perhaps cast Wednesday's words against me; however, when you use it at the browning stage, you cook it off and you can't detect it in the sauce later.

For the sautéed mushrooms

For the brown braised onions

Heat your oven to 150⁰C/Mark 2. Making sure that the beef is dry, toss the cubes in the seasoned flour, and shake off any excess. In a heavy oven proof casserole pan over a medium heat, cook the lardons in the oil for a few minutes until lightly browned, then remove with a slotted spoon and set to one side. Turn the heat up and brown the meat in batches. Don't overcrowd the pan, otherwise the beef will steam, not brown.

(Tom's top tip - a lot of books will tell you that your oil should be smoking hot to do this. What a load of rubbish. Using an induction hob, I am at setting 7 out of 9. If your oil is too hot you will end up with a blackened pan which you will have to clean out.  That misses the object of the exercise, which is to make sure that no flavour is wasted. And another myth: I was taught as a youngster that you browned meat to seal in the juices. What a load of cobblers. By browning it you create a chemical process with the sugars in the meat, known as the Maillard reaction. It gives extra flavour to your dish.)

Set the browned meat on the side with the bacon. Brown the onion and carrot in the same pan. Get rid of any surplus fat. Return the bacon and the beef to the pan. Pour in the wine and stock, and add the tomato purée, garlic and herbs. Bring to the boil, then cover and transfer to the oven. You want it to cook at a very low simmer, for about 3+ hours, or until the beef is cooked. Note that the better quality the meat, the less time it will need, so check from time to time. Overcooked beef will be dry in the centre despite the sauce.

While the beef is cooking prepare the onions and mushrooms. You will need a pan with a lid for the onions.

To braise the onions, saute them over moderate heat for about 10 minutes until they are browned (not caramelised). Then add the stock and the herbs, and a little salt and pepper.  Cover and simmer until the onions are soft and the liquid has evaporated.

To saute the mushrooms put the butter and oil in a saute pan and heat until the butter is foaming. Add the mushrooms and a little salt and stir or shake them regularly. At first the mushrooms will absorb all the butter, then the liquid starts to emerge. Then and only then do they start to brown, which is what you are looking for.

When the meat is cooked, sieve the liquid into a clean pan, and wash out the casserole in which you cooked the stew. Boil the liquid to reduce to a thick pouring consistency. Return the meat and gravy to the original pan, add the onions and mushrooms (and all their cooking liquids) and stir together well. Check the seasoning, bring up to temperature and voilà!

I serve this with mash and peas. There's a whole article to come on mash - use your imagination.