I've done a bit of teaching over the years. I enjoyed it, but living with an education professional made me realise that, as with cooking, there's an awful lot more to it than the untrained amateur might think. A lot of it was in my specialist field of liquor licensing. Lectures, seminars and master classes were generally to people with a basic grasp of the subject. While I like to think I could up their game, the greatest satisfaction was when dealing with beginners. 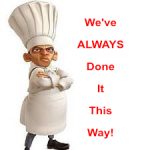 With trainee lawyers it was great for making you review your practice of the past decade. Why do we do it this way? It was gratifying to analyse things and to realise that there was indeed a good reason. But over the lifetime of this blog I've cooked a lot more, and have run a few cookery classes myself. Both of these have made me question some of the old saws that were passed on to me as Gospel, or stuff I picked up from books whose authors should have known better.

Now that's not to knock the older generation. They've been cooking food for a very long time. The only trouble is that for about a century up to about the 1970s, Britain had an entirely justifiable reputation of serving the worst food in western Europe. Had we lived in France, the previous generations' handy helpful hints might have been better. But let's look at a couple of the bits of advice which were spot on.

Yes, but why? Well, some on the internet will extol the virtues of it making the veg cook more quickly. Really? The fact is that instead of your water boiling at 100° C, it'll boil at 100.04° C. Not quite the answer to your increased fuel bills. In fact it will do two things. Firstly, it keeps the nutrients in. Boil, say, green beans in unsalted water, and a lot of the good stuff will leach out. (Sadly, as our ancestors tended to boil greens to b*****y, this didn't make much difference.) Secondly, with the likes of potatoes, it provides seasoning into the heart of the veg. Knowing when to season is sometimes as vital as knowing how much to use.*

Have you ever paused to consider how long it takes for your oven to heat up? I make a lot of bread, starting off at 230° C. Even with a reasonably modern oven it takes about 10 to 15 minutes to get there. (Don't write in to tell me how fast yours is. We are not getting a new cooker.) With a loaf needing only 35 minutes or so to bake, it's not rocket science that if 10 minutes of that is at the wrong heat, the result won't be great.

As an aside, it was giving directions for bread making that made me realise how devilishly precise you need to be in writing recipes. I told someone to put a bit of water in the bottom of the oven to create steam to improve the crust. I then discovered that they had put the loaf tin in a bain marie in the oven. Oops!

Don't salt meat before cooking. It makes it tough.

The idea of putting a steak or a cutlet in a pan without seasoning it immediately beforehand is just absurd. But, more subtly,

When making a stew, sear the meat at the beginning.

Nothing wrong with that, I hear you say. But then I asked why.  Because it seals the juices in, came the answer.

Hmm. Well, have you ever looked at the chunks of meat when you've removed them after that first sear and put in the bowl for later? Swimming in their own juices. What we really need to be told is to brown the meat. I dread to think how many blandish dishes I must have made in my early days, the meat chunks an insipid brown. For years I was far too timid about heat, till I discovered the ultimate truism, colour is flavour. I demonstrated this to an offspring fairly recently. Being a chemist she got the meat bit, the Maillard effect if I remember correctly, but raised her eyebrows when I followed this up by browning onions and carrots too. In the same unwashed pan, of course.

So, finally, a word of warning against believing everything you believe in books. As an apprentice casserole maker I consulted a learned tome on the subject. It did counsel me not to overcrowd the pan when browning the beef. The reason for this is that too much meat will lower the heat and result in it steaming rather than frying. All fine, But it continued by instructing that the oil should be smoking hot. Really? Well, just try it. Your pan will be black in no time at all. Even if you've managed to avoid ruining your meat. you'll almost certainly have to clean the pan between batches, thus losing a vital layer of flavour.

There are relatively few times you need a pan with oil or fat to be at maximum heat. Making Yorkshire pudding is one such. Another is for an omelette. That's a controversial throwaway line which I'll justify very soon in a future Tom Cooks!

* For much more information about salt and how best to use it, I recommend the fabulously good Salt, Fat, Acid, Heat by Samin Nosrat, reviewed in this column last year.