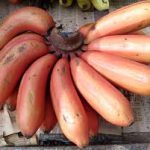 It was an early holiday in what is now the not so far east which opened my very blinkered eyes to the topic of fruits from the tropics. On visit to a fruit farm/botanical garden I tasted fruits which I thought I knew. I was amazed that they seemed so different. Slowly it filtered into my slow brain that while we might be used to one or two species of any particular fruit, there may well be many variations. 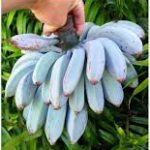 Or, in the case of bananas, about 1000 of them. They can be red, black or blue. Oh yes, and also yellow. They can be the big curvy ones we're used to in our fruit shops; they can be small and stubby; or they can be thin as a finger. I put out a teaser on social media that half of the species are inedible because of their hard seeds. That which we eat is in fact a berry; an unusual one because of its thick protection, but a berry none the less. The reference to seeds may confuse you. What we have in our fruit dishes has little brown flecks which are barely noticeable: seeds, whether we can see them or not.

Within the species there are non sweet varieties, generally used for cooking. These have become known in some parts of the world as plantain, although the botanists tell me that there is no obvious distinction. I have never eaten plantain. Apparently it is used in much the same way that we use potatoes. Plantain is the staple food of much of East Africa, and one of the top ten staples in the world.

There is something joyful about the banana, not just its vibrant colour and exuberant curve. It became a symbol of good times, and a lament for the lack of them. The song, Yes, We Have No Bananas, oddly enough, was not written in times of austerity. It was inspired by a Greek fruit seller in New York who began every sentence with a resounding Yess. When the fruit were unavailable during the Second World War, shopkeepers used to post the song title as an ironic sign in the windows. The arrival of the first bananas sparked celebrations, and was also responsible for my utter loathing of Evelyn Waugh as a man. Four bananas were delivered to his house. He sprinkled them with sugar, covered them in cream and scoffed the lot under the despairing eyes of his wife and children. What a s**t. 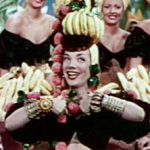 But back to the joyfulness. Until recently $15 would have bought you membership of the International Banana Club. It is now sadly defunct. Members, who included Jay Leno, and former US president Ronald Reagan, could choose their own banana themed nicknames. Sadly, history has not recorded them. The soft ripeness of the banana's tropical flesh has often been commented upon in lascivious terms. Carmen Miranda exploited that something rotten in her 1943 film, The Gang's All Here, as famous for her banana hats as for her suggestive winks.

So, you can wear it, you can symbolise it and you can celebrate it. What else? Eat it, I suppose. But wait. There's more. Take the skin. I have never ever seen anyone slip on a banana skin. Equally, I have never seen one utilised as an aid to removing splinters, nor rubbed on human skin to remove ink stains, but these are, apparently, both common uses. The leaves are even more versatile, going back, perhaps, to the book of Genesis. In some countries the word for banana translates as Adam's fig. Banana leaves are certainly more useful as cover ups than fig leaves, and are widely used for textiles. You can make banana paper, and you will find them as a receptacle for baking or steaming all types of  food. Seated at a breakfast table in Bali, I watched with interest as the waitress tore two leaves from a nearby banana tree to serve as plates.

If you have plantain recipes, let me know. Today we'll stick to sweet treats. It's fairly solid food. As the fashion today is for lighter puddings, one sees bananas feature less on dessert menus. A few suggestions. Use firm bananas for cooking, otherwise they will turn to complete mush.

One of the best barbecues I ever attended (on a freezing November night) was rounded off with bananas wrapped in foil and baked in the embers of the fire. Or cook them unpeeled in a hottish oven for 10 - 20 minutes, depending upon size. Or peel them, sprinkle with dark brown sugar, drizzle with dark rum and bake in a buttered dish for about 15 minutes.

Peel 4 bananas and cut into chunks. Spread on a tray and leave in a freezer until completely frozen. This will take at least an hour. Put the fruit in a blender with 3 - 4 tbsp of sugar and a couple of shakes of vanilla extract (a little more if you're using vanilla essence). You will need 150 ml of Greek yoghurt or buttermilk or cream. I prefer yoghurt, but adapt accordingly.

Add half of the yoghurt and start the blender. Gradually add the remaining yoghurt until the mixture is smooth. Voilà! Your ice cream is ready. Serve immediately.

And finally, an over the top American classic, as served at The Chocolate Factory, Ghirardelli Square, San Francisco. I wouldn't use two whole bananas, but that's America. 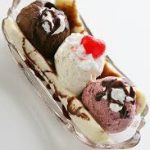 In a banana split dish (shallow and long) put one banana either side. In the middle put three scoops of ice cream. At Ghirardelli, they use vanilla, chocolate and strawberry with different toppings on each, but I would stick with vanilla alone. Put some whipped cream at either end, smother liberally with chocolate sauce and top with flaked almonds or the like. (The example pictured features a Maraschino cherry. Tom's Food! is a liberal column, but it does have standards.)

I was going to top this off, pun intended, with a chocolate sauce recipe - my Dad was something of an addict - but it has just dawned on me that chocolate begins with a C. No prizes for guessing the next foodstuff in the series.