Carry out a survey for the best known Italian cheese, and what would the results be? Gorgonzola? Less popular than it once was. (I remember my Dad telling me about this blue cheese that was so strong it used to walk across the plate. Perhaps, however, he was referring to Danish Blue, and, yes, I was a very impressionable child.) Mozzarella? With our love of pizza that would be up there, but it saddens me that the world is generally unaware of the difference between real mozzarella (which melts into blobs) and the cheaper stuff, strictly fior de latte, (which goes stringy when it’s heated).

But I suspect the outright winner would be Parmesan. Thankfully, in Britain we have moved away from those ghastly little green tubs of ready grated stuff which smelled of sick. While there are plenty of pale imitations, it is now quite easy to get chunks of the good stuff. Think of all the things we use it for. Umpteen pasta dishes, shaved on to carpaccio of beef, or slices of bresaola, pesto, aubergine parmigiana.

Aubergine Parmigiana? Stop right there. A recent tipoff from a friend suggests that some of our Parmesan favourites may be less than authentic. For example, pesto originates from Genoa, some considerable distance from Emilia Romagna which is the home of Parmesan. It was originally made using pecorino, a sheep’s cheese. Not only is Parmesan a very fine cheese – try the old stuff on a cheeseboard at a good Italian restaurant – it also has an excellent marketing department. These days, think pesto, think Parmesan.

And what of the latter dish, Parmigiana di Melenzane (Aubergines)? Well, a friend who has recently returned from Sicily, tells me there is no such dish. The original, as served to him, was named Aubergine Parmiciana (note the “c” in place of the “g”.) This comes, apparently,  from the word for the slat of a louvred blind, echoing the layers in the dish, just like the structure of the window blind.

On the internet I found support for this argument. Further, if you look through lists of the great dishes of Emilia Romagna (and these people are not shy) you will find no mention of the dish. In her seminal work from 1929, Il Talismano della Felicità (The Talisman of Happiness), Ada Boni does feature a recipe for Melanzane alla Parmigiana. She uses both mozzarella and Parmesan, but advises that you should use the best quality aubergines  – which, she says, come from Naples. I don’t see the tough Neapolitans having much to do with a cheese from the snooty north. The influential Il Cucchiaio d’Argento (Silver Spoon) also features an aubergine dish with Parmesan, but it has another for Aubergines au Gratin which uses Emmenthal.

So is Aubergine Parmigiana an impostor? To use that unique Scottish legal verdict, I think the answer is Not Proven. I don’t much care, as both versions are delicious. I give two different recipes below. As ever, a couple of preliminary points. Once upon a time one would be advised to slice and salt aubergines for half an hour or so to reduce bitterness, before rinsing and drying. With aubergines as they are bred now, that’s not necessary. Thinly slice the aubergines length-wise. Some recipes tell you to flour them. Ada Boni says not to, and I agree with her. I haven’t given a recipe for tomato sauce, as most people have their own. At its simplest, simmer a tin of tomatoes with a half teaspoonful each of salt and sugar, and perhaps a handful of basil leaves.  You’ll have a sauce in about 20 minutes. For something more sophisticated, start with a soffritto, which is a gently fried mixture of finely chopped onion, bacon and carrot, then add tomato paste, tomatoes and herbs and simmer until the soffritto has all but melted away. That can take as long as you like.

Ingredients (quantities are approximate. It will depend on the size of your oven dish)

Make your tomato sauce. While that is cooking, fry the aubergines in oil until golden brown, and set to one side. You will need to do these in batches. Pre heat the oven to 200°C/Mark 6. Grease a wide oven proof dish and spread a layer of tomato sauce on the bottom. Season the layers with salt and pepper as you go. The layers should be, in order, aubergines/tomato/cheese, finishing with cheese on top. Cook in the oven for 30 minutes or until the aubergines are soft. Finish under the grill for a nice brown, bubbling crust. 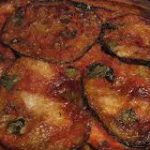 (This is Ada Boni’s recipe. She allows 6 aubergines for 6 people, which seems excessive. Otherwise she gives no virtually quantities at all)

Make a tomato sauce and fry the aubergines as per the previous recipe. Use the butter to grease the oven dish. Start with a layer of aubergines. Season well. The next layer is tomato sauce. Then a layer of parmesan and mozzarella together, and a sprinkling of torn basil leaves. Repeat until you have used all the ingredients. Interestingly, Signora Boni recommends that the last layer should be sauce – I would definitely finish with cheese. She says to cook for quarter of an hour. Her oven must have been quite a furnace. I would cook as per the previous recipe.