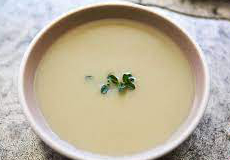 This is a very short recipe - soup ones always are. I was doing some fridge tidying up before we headed off to London for a few days' hedonism. In the depths of the vegetable drawer (so often a source of inspiration for off the wall stuff) I discovered a bag of Jerusalem artichokes. It occurred to me that I had written about these delights before, relatively recently I thought. No mention in the current Tom's Food! site, so I dug into the archives. Five years ago - doesn't time fly when you're making soup.

Go to any Italian market this time of year and you'll see traders deleafing and prepping artichokes with astonishing dexterity. Don't be fooled into thinking that today's heroes, Jerusalem artichokes, have any connection whatever with the globe variety. This week’s star isn’t an artichoke at all.  It is, in fact, a tuber. a member of the sunflower family. Nor has it any connection whatever with Jerusalem, being a native North American plant. The origin of the name is unclear. It is thought that Italian settlers in the USA referred to it as girasole (sunflower) and the word became corrupted as it passed into English. They do bear a passing resemblance to ginger root, which is a somewhat convoluted link to today's recipe.

They make lovely soup, but they do have certain, ahem, side effects. Think beans and the cowboy campfire scene from Blazing Saddles. An occupational hazard among sunflower munchers. But then I spy  a chunk of ginger which, amongst other things, is known for its anti flatulence properties. Will this recipe prove to be a medical breakthrough?  The clinical trials continue, but, more importantly it produced a lovely balanced pot of soup. As with most soups, the recipe is laughably simple. I will often add a finely chopped potato to provide some more body to the pot. There's no need here because of the consistency of the principal ingredient, but you can if you wish. The cream is optional and if you also change the chicken stock to vegetable you'll even keep a vegan happy, if such a thing be possible.

Soften the onion in a little oil. As ever, do a preliminary season with s & p. Add the artichoke pieces  and the ginger and cook for a few minutes more before adding the stock. Simmer until the veg are tender. Allow to cool for a little before blitzing with a hand blender. If you want to be posh you could sieve it, but I don't. If using, add the cream. Adjust the seasoning then serve.

Thanks and apologies to all those who pointed out that the original published recipe mentioned ginger neither in the ingredients nor in the methodolgy. Oops! We can't all be perfect.