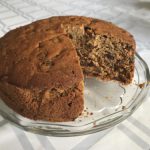 As many of you will know, making sweet things is not my forte. In an attempt to broaden my repertoire, I have tried to develop this part of my game; however, bread making apart, baking is not my thing. I therefore suggested to my sister in law, cook and baker extraordinaire, that she might contribute a recipe. In addition to her culinary skills, Alison is a Grand Master of Sudoku, and all round good egg, as Bertie Wooster might have said. She has but one fault. She lives in Hampshire (no, that's not the fault - read on). April in Edinburgh has been decidedly chilly, 12 or 13˚C on a good day. It has therefore been less than endearing to have her telephoning us on a regular basis to say that she has been too hot outside and has had to take shelter indoors.

In the interests of self education, I decided to give the recipe a bash. If you carry on with this paragraph, you will begin to comprehend why I am such a lousy baker. Feel free to skip straight to the recipe. Recipe? Now therein may lie part of the problem. I'm not much of a follower of these. Indicative rather than prescriptive is my motto. But I do understand that precision is necessary in the world of baking. Thus it was that I had carefully weighed and laid out all the ingredients, and found a cake tin of the specified size. I was about to do battle when Bossy Boots L, younger sister of today's featured cook, breezed in. You need to line the cake tin,  she said. Doesn't say so in the recipe, I replied. But after she left, I thought it prudent to make a phone call to Hampshire. Oh, didn't I say that in the recipe? came the answer. My confidence was shaken already. Which may account for the fact that I tipped the flour, instead of the sugar, into the butter. Soon rectified. And I followed the remaining steps to reach the smooth (though in my case slightly thick) batter mentioned in the recipe. This was being eased into the (beautifully lined) cake tin when BBL reappeared. Weren't you supposed to put these in? she asked, indicating the raisins. Had Alison been present, she might have learned some new words. (But come to think of it, she is ex Royal Navy, so perhaps not.) Anyway my effort turned out not too badly considering.

Apologies to expert bakers. I'm going to assume that everyone is as stupid at cake making as I am.

Ingredients (you will need a 20cm cake tin)

Preheat the oven to 150˚C/Mark 2. Grease and line your cake tin with grease proof paper. To do this you cut a circle the size of the base, then cut another couple of rectangular pieces to line the sides. You grease the tin with butter so that the paper will stick.

Beat together the butter and the sugar. Beat in the eggs, a little at a time. (The reason for this is that if you add them too quickly your cake mixture may split.) Stir in the raisins, then fold in the flour, baking powder and mixed spice, Gradually stir in 150ml of the Guinness. At this stage you have a judgment call to make. You are aiming for the consistency of a smooth batter which you can pour. If the mixture seems a little thick, add some more Guinness.

(As an aside, the average sized bottle of Guinness will have enough for three cakes, so you have to make an executive decision on what to do with the rest of it.)

Pour the batter into your cake tin. Bake until the cake is golden brown, firm to the touch, and a skewer inserted in the middle comes out as clean as when it went in. In a good oven this will take about 2 hours, but ovens vary, and it may need longer. Leave it in the tin until cool, then turn out, Wrap in grease proof paper and store for two days. (Why? Because the recipe says so, replied Alison when I asked)

As you will see, it looks nice enough as it is; however, Alison says that if she was making this for a special occasion she would glaze the surface with warmed apricot jam and decorate with chopped cherries, raisins and nuts.

Oh, one final thing. Don't mistake allspice for mixed spice. What sort of fool would do that?