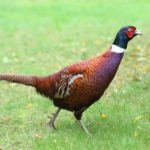 The game season is now in full swing. Probably my first exposure to game was in the form of pheasant, because that was the main thing shot at the in-laws in Perthshire. I've probably written before that the principal reason folk are leery of game is that they're not sure what to do with it. I certainly have made plenty of mistakes over the years, primarily with pheasant itself.

The traditional British way, of course, is to roast everything. It is no surprise, therefore to see encouragement to flood the plate with gravy, bread sauce and the like? Why? Because pheasant is a very dry meat. For me, roasting ain't the way to go. For years, pot roasting was my go to method. There were a few problems. Firstly I had no idea how long it took to cook a whole bird, Secondly, a pheasant leg isn't the most pleasant thing to eat, largely because of the multitude of sharp, plastic like tendons. Chefs of my acquaintance muttered heresies to me - cut out the breast and throw the rest away. I really hate waste. Then I had my Damascene moment. Don't buy a whole bird, just packs of breasts. Doh! Cooking on the bone often solves problems of dryness, but not worth it here.

But you have been warned. Even a whole breast will not take long.  By all means cook it whole, but these days I cut mine into two pieces, three if they are large. As with many meat stews, my technique is to sear the meat, remove, start the veg, add whatever liquid, return the meat until it's cooked, remove again, then reduce the liquid to the desired consistency. If you give pheasant pieces much more than 3 - 5 minutes overall, depending on size obviously, they will dry out no matter how good the accompanying sauce.

I improvised both of these sauces the other weekend, though the second one is just a variation on a chausseur. One good sized pheasant breast is enough for one average size portion. 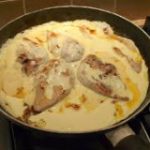 Season the pheasant breasts with salt and pepper, lightly brown on both sides in a mixture of butter and oil, then set aside. In the same pan, gently fry the onion and celery for 2 - 3 minutes. Season with a little s & p.Add the apple and cook for a further couple of minutes. (This dish works well if your veg still has a little bite at the end.) Pour in the cider and bring to the boil. (If you want to be flash, you could add a splash of Calvados first and flambé it before adding the cider.

Reduce the liquid by a half to two thirds, depending on how runny you want your sauce. Return the pheasant to the pan, Add as much cream as you want, bring back to the boil and bubble for a minute or two until the pheasant pieces are cooked. Check the seasoning and serve at once.

Pheasant with Onion and Mushrooms (serves 4)

Season the pheasant breasts with salt and pepper, lightly brown on both sides in a little oil, then set aside. In the same pan, cook the onion and garlic gently until soft. Add a generous knob of butter to the pan, increase the heat and cook the mushrooms. Mushrooms need salt - add a little at this stage. Stir in a good squeeze of tomato purée and stir together well. Add the wine/vermouth and cook until it has almost evaporated. Add the stock, bay leaf and thyme and reduce by about half. Return the pheasant to the pan, and continue on the heat until the pheasant is cooked through. If your sauce is still too runny, remove the pheasant pieces, keep warm and reduce the sauce to the desired consistency.