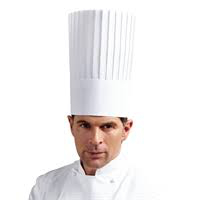 As many of you know, I have a head full of trivia. So much so, I fear that most of the useful information I once had has been eased out to make way for increasing amounts of nonsense. In a culinary quiz I could have told you years ago the symbolism of the 100 folds in a chef's toque or hat, namely that it represented the number of ways he knew to cook eggs. 100 techniques - impossible, I hear you sneer. No, clod, recipes. Still you scoff? Well in his Ma Cuisine Escoffier has 74 egg recipes plus 33 omelettes, and he was drawing almost exclusively from French classical cuisine. That's not to criticise the man - he didn't have the chance of a gap year, or the world tours which are de rigeur for today's brigade.

Anyway, I couldn't write about eggs on Wednesday without following up with a couple of recipes today, neither of which features in M. Escoffier's oeuvre.

Soufflés cause a lot of people a lot of sleepless nights. They're not so hard, provided you grease the ramekins well (remember to brush from the bottom up), and don't open the oven while they're cooking. Having said that, they're not a brilliant idea for a dinner party (remember them?) because of their last minute nature. Enjoy the best of both worlds with today's recipe for a twice baked version. Everything apart from the final bake can be done the day before. Like many of my favourite recipes, this one comes from the pen of Sarah Mellersh. The servings will depend on the size of your ramekin. A 6 fl oz (170ml) size will do for a starter: 8 fl oz (227ml) makes a larger one. Or if you are feeding fat b******s, serve them 2 - what care I? 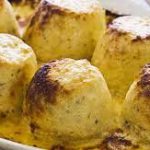 For the cheese sauce

For the soufflé base

For the leek sauce

Make a white sauce in the usual way.  Add the mustard and season. Remove from the heat and stir in the cheese to melt into the sauce. Check the seasoning. Remember this is the base for the main event - it needs to be tasty. If like me you normally use a small pan for sauce, remember that your pan will have to be large enough to contain your soufflé mix as well.

Allow to cool, then stir in the egg yolks. (if you don't, you'll have scrambled eggs in sauce - yuk!) In a separate bowl, whisk the egg whites until stiff, but not too dry. Fold carefully into the sauce and incorporate well. Line your ramekins with clingfilm and spoon in the mixture.

To cook, preheat your oven to 180˚C/Mark 4. Make a bain marie by filling a roasting tin with boiling water to come no more than two thirds of the way up your ramekins. Place them in the centre and bake for 15 minutes. Remove from the oven and allow to cool, still in the ramekins.

To make the leek sauce, sweat the leeks in the butter until soft (and NOT squeaky). Pour in the cream and season with salt pepper and freshly grated nutmeg. Bring to the boil, then take off the heat - you don't want it to reduce too much.

When you are ready for the final push, preheat the oven again - same temperature. Run a knife round the edge of your soufflés and tip on to an oven proof dish. Pour the warmed sauce over the top and sprinkle with the Parmesan. Bake for 10 - 15 minutes  until brown on top and hot in the middle. Serve at once.

Thanks yet again to Sarah for permission to reproduce her recipes. Not one of them has ever failed. 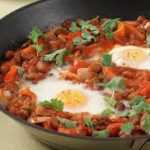 Definitely not from an Escoffier cook book, this is a rustic Mexican dish. A ranchero is someone who works on a ranch and this would be a mid morning snack, served on a corn tortilla. You can see at once that originally this would not have been baked in an oven. My guess is that a pot of sauce would have been taken out and the eggs fried on a skillet over a campfire. Done this way it makes a good brunch dish. If you want to make it more substantial you could add beans (refried would be the Mexican staple), chorizo, and whatever else you fancy. I have seen recipes which include spinach, kidney beans, rice and even guacamole.

The basics for the sauce are onions, pepper, tomatoes, garlic and chilli (traditionally jalapeños). Adjust the heat to suit your taste. Add plain paprika if you want to tone it down, or zap it up with more chilli (or by leaving the seeds in), cayenne or Tabasco or any combination thereof. If something Mexican is getting very spicy, a squeeze of lime will off set it nicely. This recipe is pretty middle of the road. You will need a wide ovenproof pan. In Mexico it would be earthenware, which doesn't go too well with our cookers.

Preheat the oven to 180˚C/Mark 4. Cook the onions, pepper, chilli and garlic gently in the oil until soft. Season lightly. Add the tomatoes and paprika and bubble for 5 - 10 minutes until the tomatoes have reduced a little. Make four little wells in the sauce and crack an egg into each one. Bake in the oven until the eggs are done to your liking - anywhere between 4 and 8 minutes. Sprinkle with the coriander and serve.