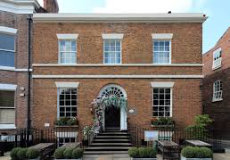 Choosing a starter for dinner at 60 Hope Street. A pig's trotter faggot is advertised as coming with smoked eel. That's a pretty formidable sounding combination. Faggots are a traditional north of England dish, a variation on a meatball, usually containing a fair bit of offal. This promises surf and turf with attitude.  A slice of meaty goodness appears, a little puddle of intense gravy alongside, and a lovely purée which I take to be onion. The menus says there is sage somewhere; however, my quest is for the smoked eel, one of the principal reasons for ordering this. I search, apparently in vain. Eventually it dawns on me. Four tiny slivers on top, in all the length of a four letter word in this review. At most one centimetre square in total. That eel will last them a long time. As disappointments go, this one is significant.

Such infuriating inconsistency was to mark the whole dinner experience here. It was a birthday celebration, so no one could accuse us of going out in hypercritical mode. Yet the contradictions begin at the entrance. From the prices it is clear that this is intended as a serious food place. (I've decided I really hate the phrase fine dining - this is a possible alternative. Let me know what you think.) You enter an elegant Georgian building into a room of modernist design, or, more accurately, of a series of design ideas, which don't gel into a whole. The general feel is spartan rather than welcoming.

But you are greeted warmly and attended to promptly and efficiently, but not overly so. A red wine for later is opened immediately, as requested, to allow it to open out. Not all places get that. The menu had enough of interest to get the taste buds going straightaway. Potted shrimps, done well, are things of loveliness. They should be presented with hot toast or the like to allow the spiced butter to ooze. Serving them hot, on the other hand, completely undoes the potter’s work, giving a plate of melted butter and rubbery little crustaceans.  They came on a “blini”, which bore no resemblance to those made by the resident Johnston blini queen. This thing was the size of a soup bowl, and the thickness of a dinner plate. Scallops were good, as they should have been at £14.50 for a portion of two.

A filet mignon was large and perfectly cooked, pink but not bloody, exactly as ordered. The same request had been given regarding the cooking of the venison. What arrived was dark brown, with the consistency of cardboard. Now I have no time for the precious brigade who will send something back because they claim it to be medium as opposed to medium rare, but this treatment of a fine animal would be enough to... (I was going to say, turn you vegan, but stopped myself in time). What it did do was get me angry. Firstly, that any serious chef would put such a thing on a plate, and secondly, that it was allowed to cross the pass. A point has been deducted from the cooking score. The replacement dish was declared excellent, and they made no charge for it, but the damage was done. Both the lemon sole and the lamb rump found approval from their consumers - I was less convinced, but I may have been still smarting over the abuse of Bambi.

Only one of us made it to dessert. I'm glad I managed to snarf a bit. A lemon tart was of the very highest quality. It came with a softish yoghurt sorbet, which had a puddle of something green on it. Offputtingly this closely resembled an eyeball, but once we summoned a little courage to put a spoon in, it too was good.

I find it very difficult to assess this place. More good than bad, but some odd combos. For example, fillet steak topped with (rather nicely) pickled cold shallots. Or hot venison accompanied by fridge cold blackberries.  Or a suggested side dish of "Cheshire new potatoes". In January? I believe that Saturday night television offers a programme called The X Factor, that elusive, almost indefinable quality in show biz which separates the very good from the also rans. Such a thing definitely exists in the context of restaurants. Sadly, 60 Hope Street, while perfectly OK, just lacks it.