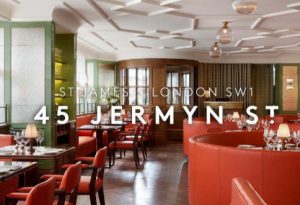 I'm occasionally (well, very occasionally) asked how I choose places to review. The general answer is that it's much as we go through life. We pick up snippets here and there; we get recommendations from friends; we stumble upon places. Once in a while there may have been a cunning plan - try getting a table at The Fat Duck with less than six months' notice - but mostly it's just happenstance.

We had arrived in London for a few days' break with nothing planned for our first night. Dinner time coincided with the start of the deluge which had been anticipated all day, and this place was literally across the road from our hotel. Some folk think that COVID means you can't get a table as a walk in. No such problems here. You are greeted with the smooth European front of house charm which used to be everywhere in Mayfair and St James.

Physically this is at the back of Fortnum & Mason. Since you enter from the street, I wasn't sure whether it was  a separate business. It is in fact successor to the old Fountain Restaurant in Fortnum's, which I never much cared for. The place is open from breakfast time right through, essentially a more sophisticated version of a continental brasserie.

The menu, while decidely eclectic, not to say eccentric, has a pleasing flexibility. The three starter sections are respectively entitled, Heritage Tomato, Caviar and Starters, but there are four mains offered as starter portions, and a couple of first courses which you can upsize. If you want something basic, you can order Welsh Rarebit, or a variation called an Elegant Rarebit, the elegance added, apparently, by bacon and tomato. Fortnums are famous for their ice cream concoctions - there is a separate Soda Bar in the main shop where your imagination can run riot. But even here you can treat the favourite nephew to a Knickerbocker Glory while you attack the cocktail list.

Dinner, however, was our thing, and I refuse to come to London and eat badly. Where to begin? £7.60 seemed remarkably cheap for caviar, till I noted that the prices were per gram, with a minimum order of 10g. In fairness, that's for the Beluga. A portion of Siberian Sturgeon caviar would be £23, and they then come to your table with blinis and baby baked potatoes and scramble a portion of eggs under your nose. Who said restaurant theatre was dead?

What about the Heritage Tomato section? Gazpacho, perhaps, or a tomato salad with burrata and anchovy. Or a couple of fish based dishes such as ceviche with tomato and ponzu dressing. If you want to poke a little fun, I was gently amused by Cornish Fisherman's Orzo. The notion of old salts, having just landed their catch, singing sea shanties round a steaming bowl of pasta (orzo are the little rice shaped ones) tickled my fancy, oh my charming Billy Boy.

Cornwall was also the source of my starter, Raw Cornish Mackerel and Caviar Tacos. This is where things got serious. Two crispy tacos were stuffed with a perfectly seasoned tartare, studded with tiny pieces of radish and green pepper, moistened with blobs of guacamole and topped with a little caviar. This was one of the best things I have ever eaten. It has to be said that the other starter wasn't too far behind. It was billed as an Artichoke and Golden Beetroot Salad, Cashew Nut Ricotta and Tiger's Milk. They serve quite a lot of ceviche in the restaurant. Tiger's Milk is the name given to the left over marinade. Its main ingredients are lime and chilli and obviously it picks up the fish flavour. The only disappointment was the fact that the artichokes were a little vinegary. The cashew nut concoction provided a satay like sweetness to harmonise with the tiger's milk. Crunch and bitterness were provided by some bitter endive. L thought the lime flavour too strong: I disagreed.

A starter sized plate of rabbit and ricotta ravioli with peas and beans (and a lot of butter) was an ample portion, as was an upsized starter of crab salad. Served with the laciest Melba toast I have ever seen, the latter came with some more dottles of guacamole (fine by me) and of mayo made with the brown meat. The three half quails' eggs on top were redundant.

I seldom mention drinks, but they have to be applauded for having a good selection of wines available as a 500ml carafe size, perfect for when you don't want to share a full bottle. Service at every level was lovely and the room itself was elegant and welcoming. As to value? Well Fortnums are never knowingly underpriced and you don't come here if you're on an economy drive. But central London overheads are horrendous. I have been charged more for a similar style of food of lesser quality. In scoring I occasionally consider whether I should add a new criterion entitled The Wow Factor. Were I to do so, at least two plates would have hit a top note. Would I come back here when next in town? Happily.