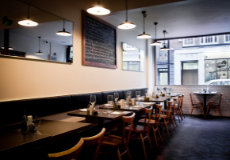 -          Do you know whereabouts this place is? asked my wife, as we  headed towards Soho's Greek Street.

-          So what's it called?, she shrilled, a sure sign that the exasperation levels were rising in inverse proportion to her confidence in my navigation skills.

Before you sniff too loudly at this geriatric, dementia-around-the-corner exchange, let me tell you that finding numbers in Greek Street is less simple than you might think. Not for these Boho eccentrics the standard, odd one side, even the other. On the left, 1, then 2, then 3 and so on. Go up, along and down, then crack the code and enter an old shop front into this bustling, rackety place. (You could easily walk by if you weren’t actively seeking it.)

Too noisy for some among my acquaintance, I suspect, especially as the music bounces thrice off the plain wooden tables, tiled walls and stripped floors. Do I care? No, for two reasons. Firstly, they were playing my vintage, Stevie Wonder, Steely Dan et al; secondly, when you're served food as good as this, any background sounds will be offset by purring noises much louder than any which allegedly emanated from Balmoral Castle following a certain referendum result.

I hadn't heard of this place before, and was surprised to learn they've been here for seven years. In the transient world of central London restaurants, that's enough to earn you a gold watch.  Why the relative obscurity? I think the clue may lie in Jay Rayner’s glowing review back when it opened. There’s nothing showy, he wrote, you will not swoon at the originality of anything. For me, that’s not such a bad thing. I’m sure that just round the corner you could have a Malaysian blue snapper, cooked sous vide then blackened on a Josper Grill, served in a bao bun and doused in gooseberry espuma, but I know where I would prefer to be. I learned of No. 10 from a recipe which chef Cameron Emirali wrote for delicious! magazine. It was not too showy; I didn’t swoon at its originality; but it didn’t half make me want to eat his food.

On entering you have to shoehorn your way into a tight space, and suck your table in to make sure the amiable waiting staff can slip past you. This was once a single fronted shop, now an eatery into which an unfeasibly large number of diners can be squeezed. There is also a small private dining room downstairs. The menu changes daily – indeed it was amended at least once during the course of our dinner. There is something for everyone. Flexibility is the order of the day. The first few dishes can be snacks for sharing, or starters. A plate of cured meats kicked things off. Google corallina and the first hit is of a genus of seaweed, before you find a pork salami from Umbria; cecina is a town in Tuscany but here is it the smoked and airdried beef from Léon in northwest Spain. I may have eaten better examples of preserved pork or beef, but I can’t remember when. I managed to prise one taste of each from L’s plate. Securing a second helping would have resulted in mortal danger. Back to Google for busiate. These are corkscrewed pasta, taking their name from busa, a type of Sicilian grass around which they are wrapped to impart the twist. This was listed as a main course. Could I have it as a starter? Of course. Like all great pasta dishes, it had but three components, anchovy, chilli and bottarga (salted grey mullet roe). Stunning in its simplicity.

In the wrong hands a dish featuring butternut squash, lentils, Roquefort, walnut and sage could be a car crash of cataclysmic proportions. Instead, it was a triumph, sweet, earthy, sharp and herby, all driving along in a perfectly choreographed convoy. But maybe that smacks too much of originality for you? Join me instead for a dish of Manx lamb, mustard mash and sprouting broccoli. Please, please, please avoid schoolboy jokes about three legged sheep. (A confession – we didn’t.) On second thoughts, don’t join me, because I’m not sharing. Underneath a decent sized helping of nicely pink seared leg steak was a mound of shoulder meat which had been cooked, at a guess, for forty days and forty nights. It hadn’t been excessively trimmed, with the occasional nugget of fat imparting even more flavour to one of this decade’s sensational sheep based offerings.

I was sorely tempted by the chocolate éclair with salted caramel; I haven’t seen a financier biscuit on a dessert menu for a long while (with blackberries and yoghurt); and the anti-originality police might be visiting to investigate the melon granita with Havana Club Anejo (cask aged dark rum, not to be confused with the inferior Reposado).

We were looked after by a lovely waitress whose name escapes me and a couple of guys who are pals of Cameron and co-owner Luke. This might make the place sound slapdash – anything but. The joint may be jumping, but it’s 100% professional. Ignore the early reviews which tell you that you can’t book. I think that ghastly London experiment from the early part of the decade has largely been done away with - we certainly wouldn’t have visited otherwise. The website assures us that they do leave room for walk-ins, and I’m not sure if they take reservations for larger groups. Here is my top tip. Book two tables for six, take eleven pals, and have them  in your debt for a very long while to come.